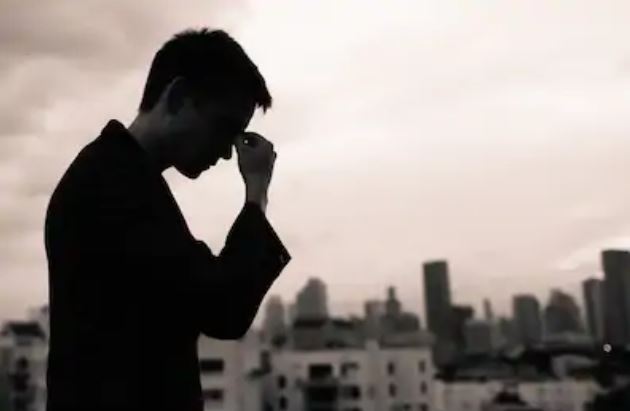 We typically think of introverts as being more naturally anxious than extraverts. And there are studies supporting this notion. In my book, My True Type, I discuss Jerome Kagan’s research on temperamental differences among infants and children. Kagan found that some infants, which he referred to as “high reactives,” were inherently more sensitive and anxious in their responses to external stimuli. He also found that high reactives tended to exhibit more introverted characteristics over the course of their lives. Similarly, Elaine Aron, best known for her work on “highly sensitive persons” (HSPs), has suggested that approximately 70% of sensitive persons are introverted.

Despite this ostensible relationship between introversion and anxiety, there are plenty of anxious extraverts as well. We also know that anxiety levels can vary broadly among individuals of the same personality type.

In addition, not everyone perceives and responds to anxiety in the same way. Some find it paralyzing and debilitating. Others find it stimulating, perhaps seeing it as an energy booster or an invocation to creativity, as might be said of “facilitative anxiety.” In his work on flow states, for instance, Mihály Csíkszentmihályi has found that our preferred level of arousal is situated between boredom (i.e., hypo-arousal) and high anxiety (i.e., hyper-arousal). 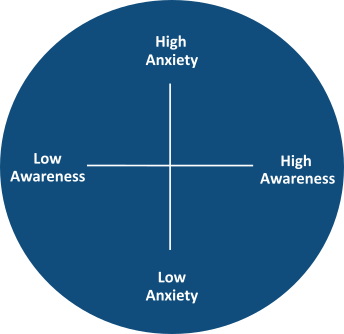 In this post, we will examine anxiety and self-awareness (including anxiety awareness) through the lens of personality, paying special attention to introvert-extravert differences. We will then consider the pros and cons of increased awareness with respect to managing anxiety.

One of the most anxious people I know is an ENTP. A veritable tornado of uncertainty and chaos (I’ve known ENFPs with a similar presentation), he is most certainly a case of undiagnosed “anxious attention-deficit disorder” (ADD Type 7). What I find most interesting, however, is despite his chronic anxiousness, he doesn’t really think of himself as an anxious person. Happy and sunny most of the time, he’s largely oblivious to and unfazed by his anxiety. To my knowledge, he’s never sought medical treatment, although he does self-medicate through regular alcohol consumption. Despite the fact that others not infrequently admonish him to focus and be a better listener, it never seems to stick.

While my ENTP friend is admittedly an extreme example, he nonetheless illustrates how some extraverts experience and deal with anxiety. Namely, they may be relatively unaware of their anxiety, even when patently obvious to others. Even in cases where their functioning is somehow impaired, they may be inclined to downplay or ignore it. My ENTP friend rarely worries about himself per se. Rather, his worries are almost always centered on external matters. This comports with Jung’s view of the extravert—one whose attention is habitually directed outwardly. This outer focus makes it easy and natural for extraverts to overlook what’s happening within themselves.

So what are the dangers of ignoring or downplaying anxiety? Burnout is a big one. Extraverts may end up running themselves ragged—working and playing hard, not getting enough sleep, mistreating their bodies, etc.—without thinking twice about it. Thus, in order to slow an extravert down, the mind / body may be forced to resort to some form of physical pain or illness, which even the most extreme extraverts cannot ignore. Unfortunately, extraverts can be slow to make the connection between their lifestyle and their bodily symptoms. Intuitive (N) extraverts, in particular, can be quite disconnected from their physicality, perhaps feeling like their body “has a mind of its own.”

That said, we know that some extraverts are more self-aware than others, including being better attuned to their anxiety and its precursors. This gives them a leg up when it comes to effectively understanding and managing it.

If extraverts are inclined to downplay their anxiety, introverts may go in the other direction. Not only do introverts seem more disposed to anxiety, but because they focus their attention inwardly, they can be sensitive to even slight shifts in their anxiety levels. An introvert who takes down an extra cup of coffee with friends, for instance, may immediately start feeling more anxious and jittery. By contrast, most extraverts would be far less sensitive to, let alone take the time to worry about, the effects of such a seemingly innocuous act.

Granted, we can’t and shouldn’t assume that all introverts are highly attuned their anxiety. Although introverts may have a greater capacity for self-awareness by virtue of using a dominant introverted function, this is no guarantee of self-awareness, especially early in life. I personally had a relatively poor sense of how anxious and high-strung I was until I started practicing yoga and meditation in my late twenties. The more awareness I developed, the more I realized and was surprised by how much tension I was carrying. I suspect that introverts who are perpetually busy or achievement-oriented are good at finding ways, not unlike extraverts, of suppressing, overriding, or harnessing their anxiety to get things done.

Anxiety may also manifest differently among introverted (I) judging (J) types (i.e., “IJs”) versus introverted (I) perceiving types (i.e., “IPs”). Since IJs, as external judgers, typically give the impression that they have everything under control, their anxiety is more likely to go undetected by others. In many respects, IJs are adept at bottling anxiety. Some may even manage to conceal it from themselves.

IPs, by contrast, tend to be more open and casual in their outer presentation. INPs, in particular, may seem more palpably anxious, as the “all over the place” nature of Extraverted Intuition (Ne) can evoke a sense of nervous energy. IPs can also be inwardly high strung, in part because they lead with an introverted judging function (Fi or Ti).

At any rate, introverts with higher levels of self-awareness have an advantage with respect to identifying potential contributors to their anxiety. For instance, if an introvert discovers that two cups of coffee is enough to significantly escalate her anxiety, which would not be uncommon considering introverts’ sensitivity to caffeine, then scaling back to one cup will surely prove helpful.

That said, there are times when self-awareness or self-consciousness can exacerbate anxiety. Consider this scenario. Two people prone to anxiety are going for a job interview. One is acutely aware that her anxiety can spike in these sorts of situations, while the other is either unconcerned or oblivious in this respect. Who will perform better? It’s hard to say without more information. If the first candidate added effective coping strategies to her self-awareness, she would probably perform better in the interview. However, if she was merely aware of her anxiety without knowing how to manage it, she may actually perform worse than the less self-aware candidate.

Is Awareness a Good Thing?

Is “ignorance bliss” or is “knowledge power”? I touched on these questions in my recent post, The Societal Role of Intuitive Introverts, where I discussed the pros and cons of self-deception and psychological defense mechanisms. Here, our question entails whether awareness is a useful antidote to anxiety.

Awareness disrupts our automatic processes. This is why athletes who over-think their performance typically perform worse. So ideally we want to employ awareness on the front end in order to properly learn a skill, be it shooting a basketball or playing the piano, then rehearse it to the point where it becomes automatic. It’s okay, even desirable, for awareness to taper off over time, as long as it’s supplanted with effective habits and responses.

The same holds for anxiety. We don’t want to constantly worry about anxiety cropping up in stressful situations. Doing so is distracting and disruptive, preventing us from bringing our full attention and confidence to the task at hand. Those who struggle with anxiety are therefore wise to work on rewiring their circuitry with the aid of therapeutic practices and techniques. While rarely easy, this can help retrain stress responses and lower baseline levels of anxiety, paving the way to a more robust and rewarding engagement with life.