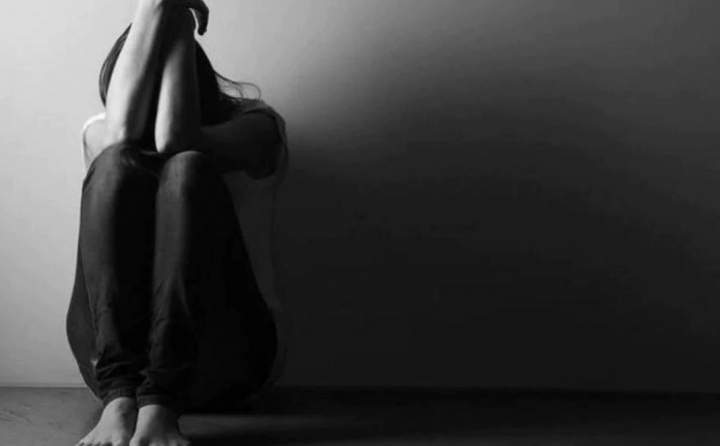 If there’s one thing that religion tells us, it’s that human beings are broken and long for salvation. To a certain extent, we all feel lost, anxious, and alone. Our fragmentation extends both inwardly and outwardly; we are neither at peace with ourselves nor the world around us. As the religious accounts suggest, we are a “fallen” species.

The Buddha, for instance, concluded that suffering stems from our propensity to become overly attached to things, including our thoughts, beliefs, and desires. More specifically, suffering occurs when our desires are frustrated, when things don’t go the way we hoped or imagined. The Buddhist solution, in a nutshell, involves realizing that everything is in fact impermanent and that fighting to hold onto impermanent things is a primary source of our suffering.

The Judaeo-Christian account suggests that ever since “the Fall” we have been separated from God. The solution, we are told, lies largely with God himself, who intends to redeem his people and heal their brokenness. All that is required then is to trust and obey God’s instructions and know that, in the end, all will be made right.

If we fast forward a few millennia, we encounter a Swiss psychiatrist named Carl Jung who believed that suffering resulted from being inwardly divided and at war with ourselves. According to Jung, the human psyche is comprised of numerous parts and functions which can easily fall into conflict if not properly handled and integrated.

Now consider this. Despite being a psychiatrist, Jung’s view actually resembles the religious accounts in one key aspect, namely, he considered suffering to be an inherent part of being human. Thus, even if one were raised in a perfect environment, suffering would still occur and require remediation. Why? Because the psyche, regardless of who you are, is full of polarities that can make you feel fragmented, incomplete, and dissatisfied.

In contrast to the above perspectives, which suggest that suffering is part of the human condition or psyche, many modern psychotherapists prefer to locate the roots of suffering in the personal past of the individual. On this view, suffering is largely attributable to unfortunate circumstances / experiences that produced psychological wounds and traumas. Ameliorating suffering thus requires identifying and working through past traumas that weren’t sufficiently addressed at the time they were incurred.

In his book, The Courage to Be, theologian-philosopher Paul Tillich discusses the starkly different ways in which religion and psychologists approach suffering and more specifically, anxiety. Tillich outlines two broad forms of anxiety: existential and pathological. Existential anxiety is an inevitable part of being human, arising in response to deep-seated concerns about death, meaninglessness, condemnation, and the like. Pathological anxiety, by contrast, is more contingent and specific to the individual, arising from an admixture of biopsychosocial factors. Tillich suggests that many psychotherapists either downplay or overlook this critical distinction, treating all anxiety as though it were the pathological type.

It has been my experience that people often gravitate toward one of these views of suffering more than the other. Those who approach it as part of the human condition may not only be drawn to religion and/or philosophy, but also to normal (as opposed to abnormal) psychology, including disciplines like positive psychology, mindfulness, personality typology, etc., all of which offer general prescriptions for living a happier and more satisfying life. Individuals in this camp are inclined to downplay pathology or victimization, preferring instead to interpret suffering within the bounds of normalcy.

By contrast, those inclined to see suffering as circumstantial, individualized, and outside the bounds of normalcy will often think in terms of environmentally-induced traumas or psychological disorders that require specialized treatment with drugs, extensive psychotherapy, or some combination thereof. Those in this camp are disposed to underestimate normality and overestimate the incidence of pathology or victimization. 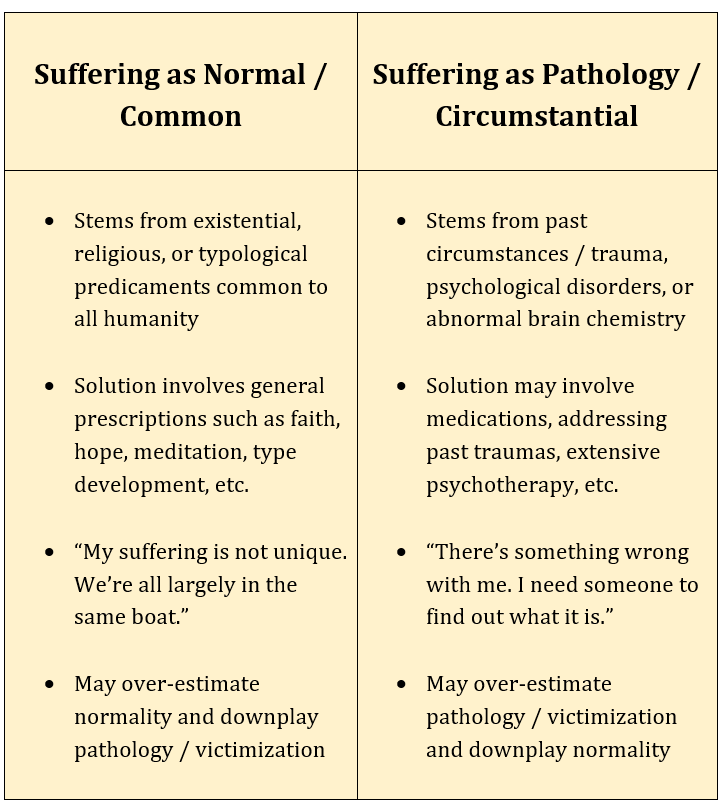 The Role of Personality Type in Beliefs about Suffering

To my knowledge, my sidekick Elaine Schallock was the first to suggest that our inclination toward one of the above views is, to a certain extent, type dependent. Namely, she has observed that personality types using Ti and Fe (i.e., TPs & FJs) are more inclined to approach suffering in terms of normal psychology or the human condition in general, while types employing Fi and Te (i.e., FPs & TJs) are more likely to think about it in terms of past circumstances, traumas, or underlying pathology.

Before further enumerating Elaine’s theory, I would like offer a few preliminary remarks. First, the degree to which we see our past circumstances in a positive versus a negative light will likely impact our beliefs about suffering. It stands to reason that those who interpret their past circumstances and upbringing as normal / healthy will focus less on pathology or victimization than those coming from less optimal circumstances. Second, we must recognize that Elaine’s theory highlights general patterns to which there are bound to be exceptions. Third, because religiosity is common in all personality types, many individuals will feel similarly drawn to both accounts of suffering. This is entirely understandable and I have no intention to dispute it here. While acknowledging that there are more qualifications that could and perhaps even should be made, we will now proceed further into Elaine’s theory.

First, it is important to understand that Elaine begins with the assumption that F pertains to the realm of life and humanity, whereas T represents the physical / inorganic sphere. So in discussing the topic of human suffering, we’re really talking about an F issue. Therefore, to properly understand type differences in this respect, we must focus largely on the different approaches taken by Extraverted versus Introverted Feeling.

Extraverted Feeling (Fe), especially when combined with N (as seen in NFJs and NTPs), engenders an interest in general theories of human nature, which is why these types tend to enjoy philosophical and/or religious studies. If we associate Te (e.g., the hard sciences) with the formulation of broad theories about the physical universe, Fe (with N) is responsible for discerning overarching laws and patterns in human behavior.

Instead of highlighting general features of the human condition, Introverted Feeling (Fi) emphasizes the unique situation and experiences of the individual. It is thus inclined to criticize Fe theories (just as Ti is skeptical / critical of Te approaches), often seeing them as biased (e.g., stereotypes) or overreaching. Especially when dominant, Fi is reluctant to concede that there is much we can generally say or assume about human beings. It much prefers to see the individual as unique, malleable, and ever-evolving—far too complex to be put into boxes or categories. Due to Fi’s interest in appreciating and protecting individuality and diversity, FPs can be commonly found studying the arts, anthropology, and sociology (e.g., studies of prejudice / inequality).

With all that being said, different orderings of the functional stack / hierarchy may make it harder for some types to appreciate or resonate with certain aspects of Elaine’s theory. For example, because many NFPs are drawn to all things natural / organic, they may resist pathologizing or managing human suffering with pharmaceuticals. Moreover, TJs may be perfectly comfortable with general theories of human nature / suffering as long as they are backed by sufficient evidence. Because Te comes before Fi in TJs’ functional stack, objective facts, in whatever form, are apt to take precedence over Fi concerns about individuality.

It nonetheless remains the case that Ti and Fe always co-occur and operate together as a “function pair,” as do Fi and Te. For this reason alone, Elaine’s theory should not be readily dismissed. In other words, students of type theory should expect to find similarities between TPs and FJs, as well as FPs and TJs, because of their shared functions. Thus, it really isn’t a question of if these types are similar, but how they are similar. Fleshing out the details demands an accurate understanding of the particular functions, as well as an understanding of how they manifest in the beliefs and behaviors of various types. This post has elaborated some of Elaine’s views on the nature and manifestations of the Ti-Fe vs. Fi-Te function pairs.

In closing, I’d like to add that despite my early skepticism, I (A.J.) have largely come to agree with the basic outlines of Elaine’s theory. We have even incorporated some of its elements into our INTJ-INTP Type Clarifier and INFJ-INFP Type Clarifier tests. Finally, I must apologize to Elaine if I have in any way failed to represent, or have misrepresented, the essence of her intuition on these matters.

Learn More about Type in Our books:

The INTP: Personality, Careers, Relationships & the Quest for Truth and Meaning

Archive of Posts on the 8 Functions