In reflecting on Jung’s brilliant conception of the types, it’s tempting to imagine that everything came to him in a perfect storm of profound insight. However, the reality is that Jung’s framework was far from being an instantaneous revelation, but was revealed more gradually and honed over time.

Initially, Jung’s conception was limited to only two primary types—the introvert and the extravert. He would ultimately expand his framework to include eight personality types (which would later increase to 16 at the hands of Myers-Briggs). Each of Jung’s types was characterized by the predominant use of one of eight functions (e.g., Ni, Ne, Ti, Te, etc.) oriented to either inner (I) or outer (E) affairs.

In light of what we know about the evolution of Jung’s understanding, one could argue that his conception of the functions was developed in a sort of piecemeal fashion, with his original notion of introversion and extraversion being repurposed as a sort of modifier for the intuition (Ni / Ne), sensation (Si / Se), thinking (Ti / Te), and feeling (Fi / Fe) functions.

In making this point, I am in no way intending to criticize Jung’s methods nor his final conception of the types. After all, there is no reason to assume that a theory developed gradually will be any less valid or valuable than one revealed in a single flash of insight. Rather, my intention is to get us thinking about how a two-part analytical descriptor like “Introverted Feeling” might produce a very different first impression than that generated by a more holistic concept like “Empathizing.” Attempting to make sense of Introverted Feeling seems to require an analytic faculty that is less necessary for us to understand the notion of Empathizing. The latter also seems more conducive to mental imagery, evoking an impression that is both immediate and robust.

To summarize, if one aims to understand a function analytically, using concepts like Introverted Feeling may be of great utility. However, if one seeks a more holistic or immediate impression, the use of shorthand labels like Empathizing may be preferable.

To date, we at Personality Junkie® have primarily utilized Jung’s terminology in referencing the eight functions. And although we currently have no plans to change this practice, I (A.J.) have long recognized the potential benefits of conceiving the functions as personified roles, or what I will refer to here as “Function Roles.”

Before exploring the various Function Roles, however, I’d like to mention that this exercise, at least on its surface, overlaps with naming practices used for the archetypes and Enneagram types, as well as David Keirsey’s types. I have always admired the Enneagram’s use of type monikers (e.g., Achiever, Investigator, etc.), which have the advantage of conveying a wealth of information in a single concept, including a quick sense of a type’s overarching role.

A serious disadvantage, which I have also remained mindful of, is that if a particular nickname fails to resonate with a reader, she may immediately lose interest and, in turn, fail to identify her true type. In this respect, sticking with Jung’s original terminology may be a safer practice than assigning shorthand labels to the functions. Holistic concepts also have the potential to overshadow worthwhile details and nuances contained in lengthier expositions. In short, it seems we are dealing with a trade-off between accuracy (Jung’s terminology) and the immediate sense of power and resonance engendered by a more holistic concept.

Lastly, before we finally dive into our discussion of the various Function Roles, I felt it appropriate to explicate the criteria I used in selecting descriptors for each of the functions:

All NJ types employ Introverted Intuition (Ni) as either their dominant or auxiliary function. Unlike its extraverted cousin (Ne), Ni works convergently rather than divergently. Instead of creating an ever-expanding web of connections, it sees / extracts deep patterns in hopes of discerning the core essence of a given phenomenon.

Due to Ni’s convergent workings, NJs commonly report a strong sense of intuitive “knowing” and conviction. Whereas NPs are inclined to see Ne’s ideas / intuitions as potentially or provisionally valid, Ni conveys the sense that its insights are categorically and objectively true. In short, what I’m highlighting here is the convergent nature of Ni intuition and the sense of knowingness it inspires.

All NP types use Extraverted Intuition (Ne) as either their dominant or auxiliary function. Since Ne is a divergent form of intuition, it is closely linked with creativity. According to Wikipedia, divergent thinking is “a thought process or method used to generate creative ideas by exploring many possible solutions.” Due to Ne’s ability to prodigiously make new and unprecedented connections, NPs typically outperform other types on several measures of creativity (e.g., brainstorming).

Ne is also strongly associated with ideational openness and exploration, making descriptors like Exploring or Seeking seem apropos as well. I ultimately opted for “Creating,” however, because it has a slightly more constructive connotation. Namely, instead of merely exploring ideas or possibilities, Ne is envisioned as creating or building something with those ideas. With that said, exploration and creativity are always working symbiotically in the Ne mind, as exploration begets creative connections and new connections inspire continued exploration.

All FP types utilize Introverted Feeling (Fi) as either their dominant or auxiliary function. As discussed in my book, My True Type, Fi is closely associated with empathy, exhibiting strong concern for the unique feelings, values, and circumstances of the individual. NFPs, in particular, can readily imagine ways in which negative circumstances might have contributed to personal misfortune or dysfunction. Thus, if we could only see things in their full context, even the worst sins could be forgiven, or at least better understood.

We should also recognize that Fi empathy is not restricted to human beings, but can come to embrace all sentient beings. This expansion of empathy has prompted many FPs to take up causes such as environmentalism, vegetarianism, animal rights, and the like.

All FJ types use Extraverted Feeling (Fe) as either their dominant or auxiliary function. Fe aims to emotionally connect and live well with others, facilitating morale and consensus (e.g., “Let’s get everybody on the same page.”).

Excelling at reading, mirroring, and influencing others’ emotions, Fe is an effective tool for procuring the emotional consensus it seeks. Martin Luther King, Barack Obama, Tony Robbins, and countless others have capitalized on its persuasive power.

To be clear, it’s not that other personality types can’t be persuasive. But because FJs are natural surveyors and communicators of feeling, they have a leg up when it comes to accessing and influencing others’ emotions.

All TP types employ Introverted Thinking (Ti) as either their dominant or auxiliary function. Whereas Te relies on standardized measures and methods, as well as on established knowledge, Ti devises and utilizes its own methods, strategies, and standards. In order to work their way through whatever problem or challenge has entered their purview, TPs (especially ITPs) spend a great deal of time in contemplation.

Ti feels less responsible to, and exhibits less loyalty toward, established facts, methods, and rules than Te. Indeed, much of what TJs consider “factual” TPs may see as provisional. Their reluctance to admit anything as certain is one reason TPs spend so much time in contemplation, questioning the merits of things other types accept as a given.

Although Ti is equally useful for practical (S) and abstract (N) problems, STPs tend to focus more on the former and NTPs on the latter. STP athletes, such as Tom Brady, often enjoy analyzing films and formulating strategies to improve their performance. Similar sorts of analyses are regularly conducted by STP business persons and politicians hoping to outwit the competition. NTPs, by contrast, are more inclined to use Ti in the service of abstract problems. Many enjoy contemplating, creating, and synthesizing concepts or theories, which is why they (especially INTPs) are commonly described as philosophers.

All TJ types utilize Extraverted Thinking (Te) as either their dominant or auxiliary function. Te is concerned with ascertaining objective knowledge (i.e., empirical facts) as well as the development and implementation of standardized methods and procedures.

Conceiving the world as a collection of hierarchical systems and subsystems, each with clearly defined boundaries, provides the sense of structure Te needs to sustain its belief in objective knowledge and the potential for continued optimization of systems and processes.

At a smaller-scale, Te may inspire the optimization of household operations, such as appropriately labeling and organizing one’s files / drawers or implementing the most up-to-date parenting methods. In the workplace, Te may be used to streamline and optimize processes, or even to restructure an entire organization.

All SJ types use Introverted Sensing (Si) as either their dominant or auxiliary function. Si is a loyal preserver and defender of the past—of cherished memories, traditions, beliefs, routines, etc. As I observed in My True Type:

Growing attached to the routine, familiar, and expected, repetition plays a prominent role in Si. The more times SJs repeat something—eat a certain meal, listen to a certain song, etc.—the more likeable (or tolerable) it becomes… SJs also take a conservative approach to their beliefs and worldview. As adults, they often persist in the beliefs, percepts, and traditions of their childhood.

Trusting the “tried and true,” Si constantly references the past to guide and inform its decisions. Rather than trying something new it prefers to “play it safe” and “stick with what works.”

All SP types employ Extraverted Sensing (Se) as either their dominant or auxiliary function. Commonly associated with the “five senses,” it mediates our relationship to our physical surroundings. Se is a keen observer of environmental details, which would have been a skill of indisputable value in our hunter-gatherer days. It also seems related to kinesthetic intelligence, with the majority of top athletes in nearly every sport being SP types.

To be fully stimulated, most Se users seek frequent changes in their external surroundings. This is why so many SPs enjoy athletics, which provide a steady stream of new and unpredictable challenges to perceive and respond to. SPs can also engage their Se through hands-on tasks and projects, as well as by experimenting with new things (e.g., recipes, furniture arrangements, fashions, etc.) and experiences (e.g., traveling). I opted to characterize Se as “Doing” because it is largely through doing / action that SPs experience the sense of Se flow and engagement they desire. 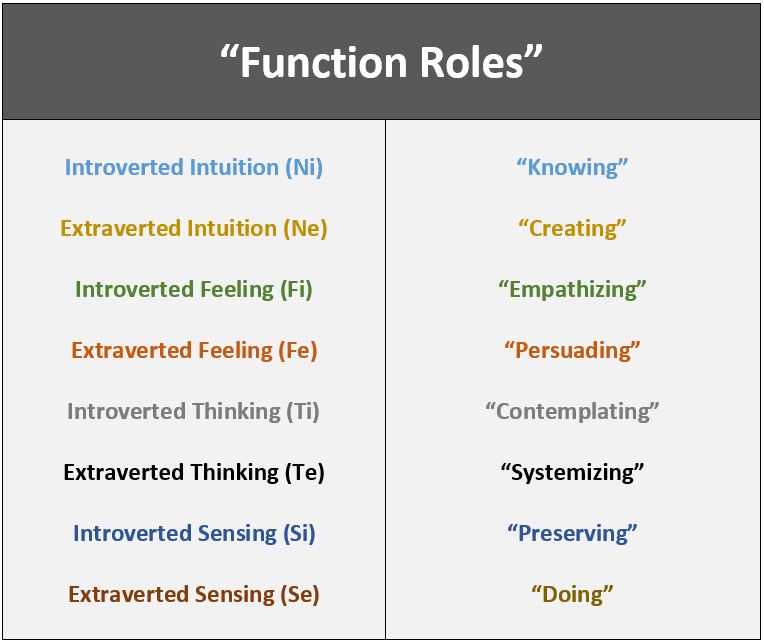 For an in-depth look at each of the 8 functions and preferences, be sure to explore our latest book, My True Type: Clarifying Your Personality Type, Preferences & Functions:

Overview of the 8 Functions