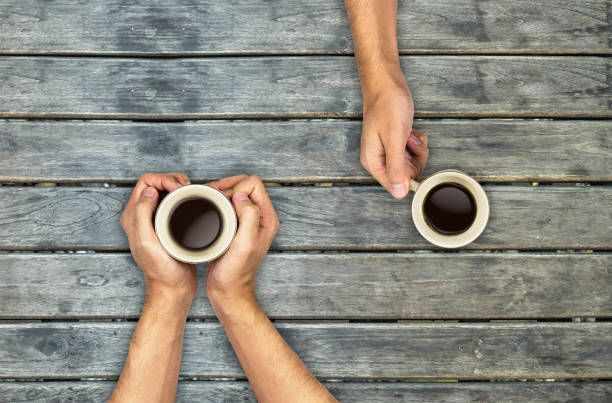 As fellow creative thinkers and theorizers, Ne (i.e., NPs) and Ni types (i.e., NJs) have a long history of mutual respect and appreciation for one another, often gravitating toward each other in friendship and/or romantic partnership thanks to their shared interest in the conceptual. Extraverted intuition (Ne), open and curious, is always ready to explore and absorb new concepts; introverted intuition (Ni), with its refined theories, is always ready to supply. What follows is a relatively predictable pattern of interaction between Ne and Ni types as they navigate the highs of a shared strength of intuition, as well as frustration stemming from the differences caused by E/I directionality.

At first meeting Ne and Ni pairs usually experience strong compatibility. Ni types are veritable wells of knowledge, and the depth of that knowledge runs so deep that indeed the Ni type himself might not know where the bottom lies (if it exists at all). Being the energy conservationists that they are, Ni types often lie in wait, hoping curious souls will seek them out, eagerly casting down vessels for filling. When Ne does arrive, bucket in hand, the initial interaction between them is fraught with energy and excitement as each type is encouraged to do what he does best.

Ne types differentiate themselves from the rest of the “bucket brigade” thanks to their creative thinking prowess. Usually more skeptical than, say, sensing types operating primarily from the grip of the inferior intuition, Ne types are masters of asking apropos questions, as well as comparing and contrasting competing theories. This allows them to appreciate Ni’s theories on a level that surpasses the more cursory acceptance that can come from other types likes Sensors. Introverted intuitives easily pick up on this authentic interest from extraverted intuitives and respond in turn by entrusting their insights to them.

As long as Ni is able to continue piquing Ne’s interest by proffering something new to the Ne type, the interaction continues in a fairly positive direction, with each type mutually reinforcing the other (usually in the form of a “question” and “answer” type of arrangement with the Ne type asking questions and the Ni supplying answers). This situation can go on indefinitely until one of two things usually happens: 1) The Ne type asks a question that the Ni is unable to answer or 2) The Ni continues to drive a theory so deep into the ground that Ne becomes bored/disinterested. Amusingly enough, each of these situations is usually met with genuine surprise from both parties, though you would think dominant intuition could see it coming. In these instances, it would seem intuitive foresight is no match for the power of projection.

In the first case, Ne is usually unwilling to exercise patience for the time required for Ni to refine an answer that would be satisfactory enough to meet Ni’s rigorous standards. The Ni type, feeling that it’s better to give no answer if they haven’t got the answer, might be reluctant to propose an answer that it hasn’t fully worked through the Ni system. This approach is usually met with confusion from the Ne who can’t understand why the Ni doesn’t simply proffer a prospective theory off the cuff of its intuition so that a debate might arise which could potentially get at the answer. This approach, of course, goes against everything the Ni type stands for. Without the conviction of a proper answer there is no sense in partaking in a rhetorical debate, the Ni figures.

Additionally, because answers are not something that the Ni type arrives at through “groupthink”, but are rather worked out individually in the depths of the Ni’s inner refinery, the Ni type faces the risk of inauthenticity if forced to entertain answers it hasn’t derived on its own. As such, Ni types may become completely disengaged when a theoretical debate arises (often seen within the context of a group of Ne types) about a topic that they haven’t explored independently and therefore have no position on. With nothing to contribute, and possibly feeling insecure as a result, the result is often the Ni type shutting down or pulling away (i.e. an inward retreat) from the conversation, and ultimately from the Ne type.

The other situation mentioned above involves the dissonance created by Ni’s propensity to linger on a single theory or topic against Ne’s penchant for variety. Ni may assume that the depth and detailing which is so essential to the reinforcement of Ni’s theories will be of equal interest to the Ne type. Oblivious, the Ni may also regale a great deal of contextual detail, either before ever getting to the crux of the thesis, or afterward by carrying on with endless examples, unaware that Ne fell off the wagon a while ago. With one essential point to make, Ni generally isn’t hiding more than one golden egg in its basket. Of course, “golden” is the key word there; what Ni lacks in quantity it makes up for in quality.

But this is often lost on extraverted intuition’s axiom that “all ideas are created equal” (or, perhaps more accurately, “all ideas – at least initially – deserve equal consideration”), which consequently may miss the intended gravity of Ni’s insight. As a general rule, Ne avoids being confined by or committed to just one theory, feeling that this could ultimately retard extraverted intuition’s ongoing quest for knowledge. Additionally, Ne, sensing that there is a great deal of theoretical ground to cover (and never enough time), does what it can to avoid being hampered by repetition. Therefore, the general modus operandi for the Ne type is surveyal; once Ne senses that it has the “gist” of the theory, it anxiously looks to move on to the next idea. This may mean impatiently leaping into new questions, perhaps even changing the topic altogether, so that it can continue trying to coalesce an expensive web of disparate philosophies into one unified theory.

This is confusing, however, to the Ni type who believes that he has, in fact, handed over just such a unified theory – a theory to end all theories! If the Ne fails to renounce all other wisdom as hogwash (as Ni expects he should) and enthusiastically embrace Ni’s doctrine as a committed disciple right there on the spot, tension usually arises. Worsening matters, the Ni type, mystified by how it is that the Ne could possibly be reluctant to commit to his theory, will often proceed to repeat the concept thinking perhaps the explanation wasn’t clear and if he could just explain some more then maybe Ne would get on board. By this time, of course, Ne’s patience has worn incredibly thin, and it’s unlikely that the Ni could “convert” Ne in the immediate aftermath of such an episode anyway. Feeling constrained, the Ne type may move on, going wherever the environment is amenable to more explorative conversation.

What’s perplexing to Ni is that even though Ne may have seemed intrigued by, even highly enthusiastic over an Ni idea initially, Ne by nature tends to lack the theoretical staying power of Ni; it’s fleeting. This catches the Ni off-guard as it’s naturally expecting the kind of discernment and religious devotion that he himself exhibits as an introverted intuitive. The result can be Ni actually feeling betrayed, as if Ne is guilty of intellectual, or metaphysical, infidelity. Ni, having spent a lifetime carefully crafting and refining its paradigm, is horrified when Ne, like an unwitting consumer tossing back a $2,000 glass of Burgundy in a gulp or two, fails to really realize (let alone savor) what Ni has supplied. And before the Ne can even get the words, “thanks for the drink!” out, he’s already looking for the next vintage (or so it seems to Ni), because once Ne has gleaned the “basic” concept, it needs to find another new idea or theory. After all, how can Ne be certain that a given wine is the best one not having tried anything else?

For the Ne’s part, the initial encounter with an Ni’s philosophy has the appearance of something novel (since it’s likely the first time Ne is coming in contact with that theory.) Such apparent novelty implies that the Ni type is open to new theories and areas of conceptual exploration, much as the Ne is. Imagine the Ne’s surprise when he learns that the only theory that Ni is open to is his own, and that when confronted with new concepts from Ne, Ni isn’t going to be nearly as eager to entertain them as Ne was. So goes the common refrain from Ne types: “you’re so closed-minded!” or, “you’re just threatened by competing ideas!” Additional accusations may include decrying the Ni as dogmatic and hypocritical for dishing out its own perspectives without being able to receive others’ in turn.

Often, however, all that is needed is some space and time for each type to do some additional work within the function stack, to consider one another’s type differences as well as their personal philosophies. The Ni type can’t be expected to show the same openness to a new theory that Ne would, nor can Ni expect the same commitment, “or closedness,” to a theory that Ni has. However, as Ni continues in its growth and development it will (albeit slowly) tweak and refine its paradigm to include those pieces of information that it has extracted from subconscious Se experience. In other words, if one of Ne’s proposed theories actually holds weight, Ni figures that it will eventually “discover it” for itself and incorporate it into the working Ni theory – a much more authentic way for an Ni to adopt an idea than by simply accepting it from without. The same is essentially true for Ne, except that it’s consciously collecting as many competing theories as possible from the outset so that it may work them through the remainder of the function stack, through Si as well as the judging functions. And if an Ni theory is true, it too will be proven with time and experience.

If Ni can appreciate Ne’s need for exploration, trusting that Ne will return if, after tasting hundreds of vintages, he eventually realizes he’s found something really special in Ni’s insights, then a respectful and enjoyable relationship can occur. Conversely, if Ne uses its open-mindedness to understand the difficult position that Ni is in with respect to being able to accept a new theory from without, trusting that Ni is constantly refining its insights and learning to be open to experience so that its theorizing eventually becomes “all-inclusive,” these two types can continue sharing a particularly special rapport with one another as they each set about on the quest for knowledge and truth.

To learn more about Ni, Ne, and intuitive personality types, be sure to explore our books: