The Myers-Briggs Type Indicator® (MBTI®) is the most widely used personality instrument in the world. Over the last decade or so, however, it has become an increasingly popular target and strawman for typology skeptics eager to dismiss it is as unscientific. While there is ample research demonstrating that the MBTI® has at least a moderate level of scientific validity,1 I would like to explore this debate in a broader context, including chewing on questions such as these: Why has Jungian / Myers-Briggs typology become (and remained) so popular? What psychological needs does it satisfy? Is empirical validation the only thing that makes a theory valuable?

One could certainly argue, as skeptics are wont to do, that the hitherto popularity of the MBTI® has little to do with its scientific veracity. After all, beliefs in a flat earth or a geocentric universe were clearly wrong despite being embraced for centuries. With that said, one could also argue that theories about human beings are in an important sense different from those about the physical world. Indeed, we commonly see this people-things distinction in the sciences vs. humanities structuring of academic institutions. The study of human beings involves different types of data and methods, and may even require different truth criteria, than investigations of the natural world; at minimum, the phenomenon of consciousness seems a very different type of thing than physical processes. Therefore, when we consider that Jungian typology is a theory about human beings and belongs, at least in part, to the humanities, it is probably unfair to insist that it be scientific in the same manner as the physical sciences.2

According to thinkers like Kant and Jung, the human mind is not a blank slate, but is comprised of deep psychological structures that shape the way we experience and interpret reality. Not only do these structures influence our perceptions, but also our psychological needs and desires, including our desire to understand and find meaning in our lives. Indeed, I see Jung’s overarching concern as one of discerning the relationship between these psychological structures (e.g., archetypes, personality types) and human meaning / psychospiritual vitality, including their influence on art, philosophy, literature, and religion. Among other things, Jung’s work helps us understand why human beings are invariably drawn to things like myth, religion, and other forms of symbolism.

Although Jung liked to think of himself as a sort of clinician-scientist, he certainly wasn’t a scientist in the narrow sense typically employed by his critics. For such critics, the term “truth” is only properly applied to knowledge derived from a specific set of scientific methods. This is problematic for a number of reasons.

The first problem, which I touched on above, is that studying human beings, including consciousness in general, is apt to require a different tools and methods than those employed in the physical sciences. To conceive and approach human beings as a mere set of physical processes (i.e., reductionism) will undoubtedly result in a failure to understand the things we cherish most about human life, namely, its qualitative elements.

Second, when critics limit truth to only a narrow version of empirical science, they fail to give credence to our everyday experiences of truth and meaning, including that derived from the arts and humanities. Can we not find truth in art, fiction, music, or religion? When these things resonate with us deeply, we often use terms such as “true” or “real” to describe them. Thus, there are at least two ways we determine truth: through science / intellect and through experience. These dual modes of knowing are nicely illustrated in Seymour Epstein’s Cognitive-Experiential Self-Theory (CEST), as well as in the vast body of research enumerating left vs. right brain differences. 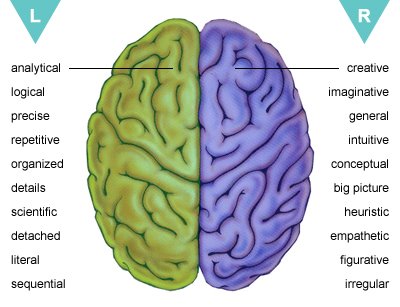 Accordingly, we might ask ourselves whether it is appropriate to restrict our view of truth to only one half of the brain (i.e., the “analytical” left hemisphere) or whether it is better to allow both hemispheres to weigh in on the matter. If we opt for the latter, the sphere of truth must extend beyond science and incorporate, among other things, insight and wisdom from the humanities. Of course, this is bound to complicate the means by which we define and evaluate truth. This is why some prefer to limit truth to the realm of left-brained science, which provides clearer boundaries and criteria for debating the merits of various truth claims.

Clearly, the degree to which we consider something true will depend on the way in which we assess and define truth, including our assumptions and preferred epistemology. If feelings (F) or intuitions (N) are allowed to participate at our truth roundtable, we may well arrive at a different conclusion than if only thoughts (T) and sensations (S) are granted a say. Moreover, one could argue that each of these psychological approaches will be more (or less) useful depending on the situation. Feelings, for instance, are apt to be of less value when repairing a flat tire versus navigating human relationships. Thus, determining which tools and methods are most conducive to a particular problem is of obvious value.

With this in mind, let us now consider the nature of the problem or set of needs that Jungian typology aims to address. At minimum, it seeks to:

Interestingly, one could propose a rather similar list of objectives for psychology in general, as well as for religion. This should come as little surprise to those familiar with Jung’s work, which reveals significant overlaps between psychology / typology and religion; both offer explanatory theories of the human condition, as well as potential ways of improving it. Considering these similarities, the degree to which we ascribe truth and value to typology vis-à-vis competing belief systems will hinge on its effectiveness in satisfying our expectations. If our chief desire is a scientifically-derived (in the narrow sense) account of human psychology, we may be left wanting. If, however, our expectations are more holistic, involving an admixture of truth, meaning, and elegance, we are more apt to find it compelling. In my view, the widespread interest in Jungian / Myers-Briggs typology speaks to its holistic appeal.

Beyond Scientific: The Importance of Elegance

Relatedly, one could argue that the beauty or elegance of a theory plays an important role in its appeal or palatability. As Chad Perrin explains in his article, “Elegance,” beauty / elegance entails a balance of simplicity, complexity, effectiveness, and appropriateness:

Elegance is not about aesthetics. Rather, aesthetics is about elegance. Ostentation lacks aesthetic appeal, and is inelegant (read: “tacky”), because it’s gratuitous. Simplicity is often not elegant either: if something is too simple, it is nonfunctional, and fails to achieve its aim. What makes something beautiful is not strictly simplicity, symmetry, complexity, or any other such characteristic. Instead, what makes something beautiful is that its characteristics are all appropriate to its purpose. Complexity can be exceedingly beautiful, as long as it’s not gratuitous complexity, which is just chaos and confusion. Likewise, simplicity can be exceedingly beautiful, but if you make something gratuitously simple, you get dullness rather than beauty.

I love Perrin’s notion that something is beautiful when “its characteristics are all appropriate to its purpose.” This is why, when evaluating a theory like Jungian typology, we are behooved to first consider its purpose—what it aims to accomplish and what we expect from it.

Of course, we can’t really measure elegance in the same way we can measure something like the speed of light. This is because elegance is in large part assessed holistically or qualitatively rather than quantitatively; in many respects, we “know it when we see it.” It is through this sort of qualitative assessment that we have come to recognize, among other things, great works of art and literature. Granted, there is bound to be some measure of disagreement regarding what constitutes elegance. After all, if the individual is designated as the primary arbiter of elegance, such disputes are all but inevitable. And while such disagreements are rarely fully resolved, they can be partially overcome through dialogue and democratic processes.

The Myers-Briggs / MBTI vs. The Big Five

But what about popular academic models of personality? How does the Myers-Briggs stack up, for instance, against the Big Five?

First, it is worth noting that these two frameworks are in some ways quite similar and their major constructs have been shown to consistently correlate with each other. Second, the Big Five is significantly younger than the Myers-Briggs, so it remains to be seen whether it will surpass it in popularity among the general public.

With that said, my sense is that although the Big Five may have more empirical backing than the Myers-Briggs, it is not as theoretically elegant. And because many (most?) typology enthusiasts are drawn to elegance, the Myers-Briggs will likely retain its favor among the general public. If this proves to be the case, it will continue to be a favorite target of typology critics who fail to understand its aim, purpose, and value.

Personality typing is not merely an analytic process, but offers an elegant and inspiring account of who we are, as well as paths to growth and fulfillment. There is a satisfying sense of identity and unity that comes from knowing one’s type (e.g., INTP) that is missing from the Big Five. The Myers-Briggs types are also more life-like, familiar, and recognizable, described in everyday terms such as thinking, feeling, sensation, and intuition.