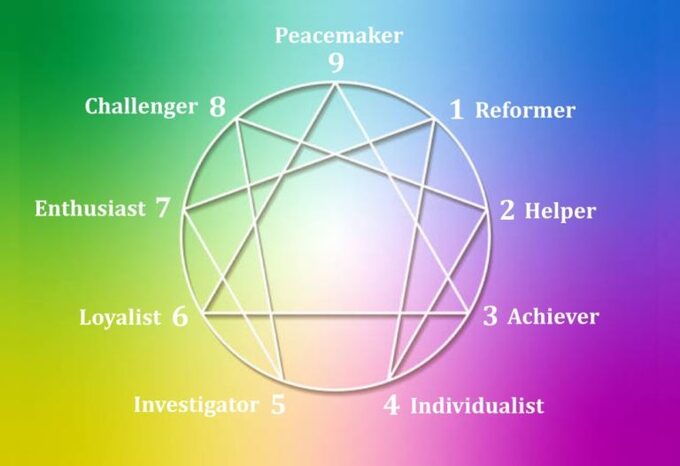 As discussed in my post on Enneagram – Myers-Briggs correlations, Enneagram types 4, 5, and 9 all lean toward the Introverted end of the spectrum. True to Introvert fashion, they tend to keep the world at arm’s length. The Enneagram 9 aims to maintain inner peace by avoiding sources of stress or conflict. Both Fours and Fives are introspective and Intuitive (N), with Fours focusing more on their feelings and tastes and Fives on their thoughts and theories.

I first started thinking about this post when I was contemplating where Carl Jung’s personality might fit on the Enneagram. In my favorite Enneagram book, Personality Types, Don Riso and Russ Hudson type Jung as a Nine (9w1). Many of you may find this surprising and hard to believe, as I did when I first encountered it. After all, Jung was nothing less than an intellectual giant. So why not type him as a Five? On second thought, he also had a mystical bent—exploring matters like dreams, symbolism, synchronicity, etc. So maybe he was actually a Four?

If we take Jung’s self-depiction as a Thinker (T) and investigator at face value, we’d have to consider him a Five. But it’s also possible that Jung made these claims as a way of buttressing his reputation as a respectable psychiatrist who took truth and science seriously. There’s little doubt that Jung wanted people to trust his investigative methods and remain open to his observations and insights.

In order to get to the bottom of this issue, we need to reckon with some key questions such as: What was the primary motivation behind Jung’s work? What was it that drove his prolific creative achievements throughout his adult life? Exploring these questions should shed some much needed light on Jung’s personality type in particular, as well as Enneagram types 4, 5, and 9 in general.

I like to think of the Enneagram types in terms of the foundational roles or archetypes they represent. These roles—be it peacemaking (9), investigating (5), or otherwise—are what drive, sustain, and define them.

Let’s now return to Riso and Hudson’s assertion that Jung was a Nine. If Nines’ primary role is one of peacemaker, especially maintaining their own inner peace, then how does this square with what we know about Jung and his work? Namely, is there a sense in which his writing served as an avenue to his personal peace and comfort? If so, how?

Fours, and especially Fives, aren’t afraid to confront the darker sides of life and humanity. Both want to know and convey truth, however ugly or uncomfortable. Nines, by contrast, tend to shy away from certain realities that have the potential to make them or others feel uncomfortable. Simply put, peace and contentment are higher priorities for Nines than objective truth-seeking. According to Riso and Hudson:

Nines… have a philosophy of life that enables to quiet their anxieties quickly… their view of life is open and optimistic. But we may fault Nines when they refuse to see that life also has difficulties which must be dealt with. Their refusal to fix the tire when it goes flat, so to speak, is symbolic of their problem.

In other words, Nines look for ways of comforting themselves rather than engaging more honestly and directly with the messiness of life. They “don’t want to be affected by the environment.” I therefore see Nines as embodying “The Innocent” archetype.

In typing Jung as a Nine, I think Riso and Hudson may have been emphasizing the fact that Jung’s work contains an overarching message of hope and optimism. Namely, Jung believed that by communing with the unconscious—be it through dreams, insights, synchronicities, etc.—we can all live richer and more meaningful lives. Although Jung opted not to follow his father into Christian ministry, one could argue that his ultimate concern remained essentially spiritual in nature. He seemed to find the spiritual life he was seeking through his explorations of the unconscious.

By contrast, one might contend that Fives are interested in discovering truth irrespective of its spiritual implications. Indeed, many (although certainly not all) Fives seem content to self-identify or function as atheists. While they may stumble their way into a spiritual type of experience when deeply absorbed in their work, many will interpret it in physical (e.g., neuronal firing) or epiphenomenal terms. Even Fives with a religious bent may be more interested in tinkering with theological constructs than with spiritual experiences per se.

The Enneagram 4 seeks intensity of feeling through nature, romance, or various forms of aesthetic expression. Identity is another overarching concern for Fours, who invariably see themselves as special or unique in some way. It’s hard to say to what extent the average Four sees herself as religious or spiritual, although I suspect most would prefer the latter descriptor over the former. Compared to Nines, Fours are more disagreeable. They’re more likely to push the envelope in order to make a statement, even functioning as provocateurs. They’re not opposed to stepping on a few toes to get their message across. If Nines prioritize inner peace, Fours prioritize intensity of feeling and authentic self-expression.

So where might Jung fall on the Four-Five spectrum? Despite his prodigious creative activity, one doesn’t get the sense that he was an artist per se. He clearly prioritized content over style as a writer. Thus, from an Enneagram perspective, his work seems more Fivish than Fourish.

Having ruled out the Four, we’re left with two contenders: Nine or Five. So was Jung ultimately a seeker of spiritual comfort and reassurance (9) or objective truth (5)? Hard to say. To a certain extent, I can imagine both motivations co-existing in the same person. I think it’s possible to have a go-to source of spiritual meaning while simultaneously taking up investigations related to that foundation. This is essentially what scientists do, only their foundation is scientifically rather than spiritually oriented. It’s also possible that Jung’s observations regarding the spiritual benefits of engaging with the unconscious were, in a sense, objectively true; and this doesn’t make Jung any less of a scientist. So even if his work was spiritually concerned, this doesn’t rule out his being an investigator at heart or make him guilty of fudging or feigning objectivity.

All things considered, I think the incisive and penetrating nature of Jung’s work is more consistent with that of an Enneagram 5 (5w4) than a Nine. His writing suggests he was conversant with an incredible breadth of historical and literary sources. This bespeaks a willingness to confront reality in its myriad permutations rather than relying on only a few sources of comfort and reassurance. While Jung never stopped heralding the importance of the unconscious mind, I suspect his research and experiences—both personally and professionally—continued to provide good justification for doing so.

Learn more about personality theory and the 16 Myers-Briggs types in our books: