At age 23, the prodigious writer and theorist Ken Wilber published his first book, The Spectrum of Consciousness. Originally published in 1977, it, along with some of Wilber’s subsequent books, remains one of my favorite works on psychology and philosophy.

As suggested by the title, the central metaphor of Wilber’s book is that of the spectrum. We all know that a ray of light passing through a prism or droplet of water divides into an optical spectrum of various colors. A rainbow is a classic example. Wilber suggests that human consciousness functions similarly. He proposes that human beings, like a beam of invisible light, start out as a unity. We begin our lives with a unified consciousness, without any real sense of differentiation between self and world or mind and body. In time, however, Wilber suggests that human consciousness undergoes a series of divisions or “dualisms.” A dualism occurs when our discriminating mind divides our experience into two distinct parts; what was previously one has now become two.

Before diving deeper into the details of Wilber’s dualisms, I want to give you a brief preview of why they are important. They are important because personal growth and healing require understanding and reconciling dualisms, divisions, and fragmentations in our consciousness. This is why the term “wholeness” is often associated with salvation or enlightenment. In order to become more whole, we must become aware of how we became and continue to be fragmented.

Wilber’s framework also helps us understand how various schools of thought, as well as various therapies, fit into the overall picture of human psychology and human development. Somatic therapies, for instance, which seek to integrate mind and body, can be seen as addressing Wilber’s tertiary dualism. Likewise, personality typologies, such as that of Jung and Myers-Briggs, relate mostly to the quaternary dualism. With that said, we will now take a brief tour of Wilber’s four dualisms.

An Overview of Wilber’s Four Dualisms

Primary Dualism: Self vs. Other. The first division in human psychological development—the primary dualism—occurs when the infant begins to differentiate between self and “other,” between subject and object. Herbert Benoit aptly describes this dualism: “Suddenly we become conscious that our principle is not the principle of the universe, that there are things that exist independently of us.”

Secondary Dualism: Life vs. Death. Wilber’s secondary dualism, closely connected with the first, is that of life versus death, being versus non-being. Once the infant/child has the conception of being a separate self, she develops a subsequent concern for the continuation of that self, as well as the potential threats posed by the outside world. Benoit describes this as a “fear of death, of the danger which the Not-Self represents for the Self.”

Tertiary Dualism: Mind vs. Body. The tertiary dualism involves a split between mind and body. Over the course of development, we increasingly identify with our mind/ego while simultaneously distancing ourselves from our bodies. The very notion of “my body” exemplifies this distinction between the mind (i.e., “I”) and body (i.e., “my body” as an object of my mind).

The following figure illustrates these dualisms, as consciousness becomes increasingly divided over the course of psychological development: 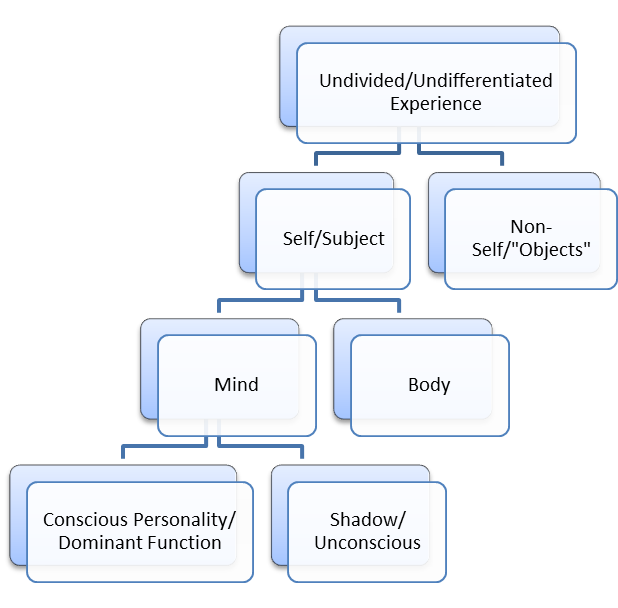 With each new dualism, there is further objectification. We first objectify the world (primary dualism), then our bodies (tertiary), then certain elements of our minds (quaternary). With this increasing objectification, we see a commensurate decrease in what we are willing to subjectively identify with. In the undifferentiated consciousness, there is no real sense of identity. There is only experience with minimal discrimination; the ray of light is whole and intact. With each new dualism, however, we come to identify with an increasingly narrow bandwidth of experience. Instead of experiencing the whole ray of light, the entire spectrum, we consciously identify with only one or two colors. By the time we reach adulthood, what began as an undifferentiated consciousness has become a highly specific and well-defined self.

While this specialization of consciousness certainly has its benefits, exemplified in each individual’s set of skills and abilities, it also has a downside with respect to human vitality and well-being. Namely, as our identity becomes increasingly narrow, we feel more restless, isolated, and fragmented. As we cut ourselves off the world, our bodies, and our subconscious mind, we effectively choke off the vital currents that sustain us. We become fatigued and depressed, without knowing exactly why.