Understanding the ways in which human beings make decisions, both individually and collectively, as well as the rules and laws that stem from those decisions, is of obvious importance to the future of humanity. Jung posited four psychological functions responsible for human decision-making: Extraverted Feeling (Fe), Introverted Feeling (Fi) , Extraverted Thinking (Te), and Introverted Thinking (Ti). Assuming Jung’s theory is essentially valid, it seems critical that we work to understand these four Judging functions, not only for the sake of furthering our understanding of human psychology, but also for broader moral, social, and political reasons. If we continue to remain ignorant of the psychological structures that underlie our decisions and judgments, we will continue to suffer the consequences of subjective biases and blindspots.

In many respects, it has become commonplace for us to divide the world along the lines of Thinking and Feeling. For example, we often contrast the sciences (T) with the arts/humanities (F), capitalism (T) with socialism (F), fiscal issues (T) with social (F) issues, etc. While useful to some extent, these dichotomies do not allow for the same degree of nuance granted by the use of four factors (e.g., Te, Fe, Ti, Fi), which is one reason why the Myers-Briggs framework has proven such a useful analytical tool.

Although many theorists, including Jung and others, have worked to define and clarify the nature of the four Judging functions, there is much that has yet to be explored. In this series of posts, which frequently draw on the excellent theoretical work of my colleague, Elaine Schallock, we will compare and contrast the nature of the judgments and judging process associated with the four Myers-Briggs Judging functions, focusing particularly on the notion of Fe, Fi, Te, and Ti “laws.”

There are two basic types of laws: laws we discover (i.e., “natural laws”) and laws we create (“created laws”). With regard to the functions, we can also think in terms of these two types of laws. We might think of T natural laws as the laws of physical phenomena and F natural laws as those pertaining largely to human consciousness and human behavior (Again, we are reminded of the commonplace division between the sciences and the arts/ humanities/ social sciences.).

More specifically, we might associate Te natural laws with macrophysical laws (i.e., classical physics), such as the law of gravity. On the macrophysical level, the universe appears highly orderly and predictable. With the possible exception of high-flying basketball stars like Michael Jordan, the laws of gravity affect us all in consistent and predictable ways.

Microphysics or particle/quantum physics shows us a very different side of the universe. Most would agree that the quantum world appears very strange, even illogical or paradoxical. Einstein desperately wanted to believe that the micro world would prove as predictable as the macro world, exemplified in his famous dictum: “God does not play dice.” But despite his best efforts to demonstrate otherwise, the fact that the quantum world functioned according to a different set of laws proved too stubborn for Einstein’s indomitable will to overcome.

You may have already guessed it by now, but we will associate Ti natural laws with microphysics. Specifically, we might associate Ti with an individual wave/particle, one which does not behave according to Te macrophysical laws. It is only when a conglomeration of Ti particles are involved that Te laws begin to take shape. So just as macrophysical laws like gravity are insufficient to describe the microphysical world, Ti cannot be reduced to the laws of Te (or vice-versa); Te and Ti are qualitatively distinct. Neither is inherently more valuable or important than the other. Rather, both are required to temper and balance the other, an issue we will discuss more in the next post of this series.

We can apply the same introverted-extraverted pattern to Fe and Fi natural laws. Namely, we can associate Fe with macro-level human behavior and Fi with the individual. Fe natural laws, such as those of typology, involve redundancies and patterns in human attitudes, cognition, and behavior. The existence of such laws allows us to classify and predict human behavior with surprising accuracy.

Despite the existence of Fe laws, we must also recognize some degree of variability and unpredictability when it comes to the value judgments of individuals (Fi). This does not mean that individuals are not subject to Fe laws, but only that the contingencies of an individual’s situation may lead her to deviate to some extent from the Fe norm. There are even individuals who fall largely outside of Fe norms, which is why have fields like abnormal psychology. This is why researchers are always concerned with having a sufficient sample size, since too small a sample may fail to represent the norm (Fe) if it contains too many outliers (Fi). Therefore, there is some degree of merit in arguing for (Fe) or against (Fi) the ability of systems like typology to accurately predict and describe human behavior. At the level of the individual, the accuracy of typological predictions will be more variable than what we would see across a larger population. 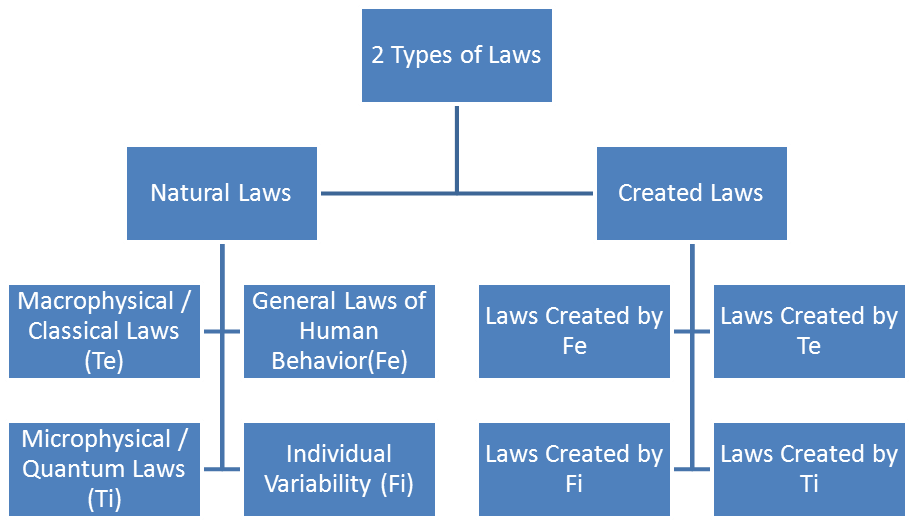 Another important point to consider is that of perspective. For instance, even if the quantum world refuses to defy the demands of human logic, that does not necessarily mean it doesn’t have its own set of laws. In fact, if we lived in the in the quantum world, things like gravity might appear strange and illogical. Similarly, even if the behavior of a given individual seems difficult to predict from without, the individual himself may experience his behavior as quite logical and predictable. So it is not merely the case that Te, Ti, Fe, and Fi laws are qualitatively distinct, but also a matter of our being more familiar with certain types of laws, thereby making the less familiar laws seem all the more strange and illogical.