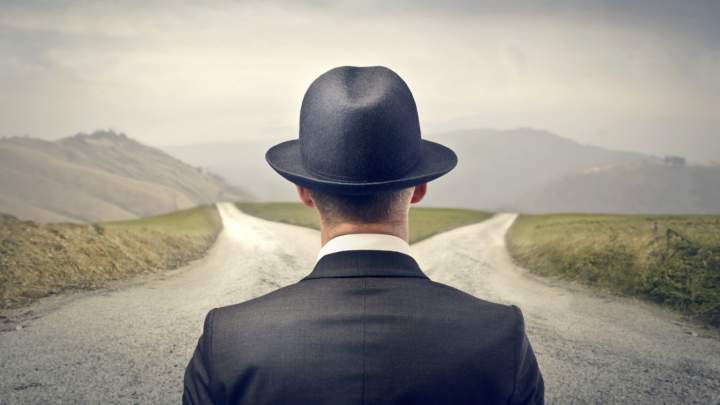 Carl Jung named each of his personality types according to its dominant function. What we now would refer to as an INJ type, for instance, Jung referred to as the Introverted Intuition (Ni) type. Jung of course had good reasons for doing so. For one, he saw the dominant function as the most conscious and well-developed of all the functions; even the auxiliary function, in his view, was typically far less consciously accessible. Jung did believe, however, that the non-dominant functions could to some extent be developed in order to round out and assist the dominant function.

In order to serve as an effective sidekick, Jung claimed that the non-dominant function would likely be of the opposite attitude, that is, opposite in its introverted (I) – extraverted (E) direction. Because the dominant function of extraverted types is by definition extraverted in its direction, extraverts, according to Jung, require the services of an introverted helper function (and vice-versa for introverted types). We now know from the work of Myers-Briggs and others that this helper function can be found in one of two places, namely, in either the auxiliary or inferior position of the function stack. Both the auxiliary and the inferior function will be of the opposite I-E direction as the dominant function. This holds true for all types. Let’s consider the ENFP and INTP types as examples:

In examining the function stacks of these two types, you’ll notice a consistent oscillation between their E and I functions. This arrangement provides the necessary balance and complementarity between neighboring functions in the function stack.

A Suitable Sidekick: The Auxiliary vs. Inferior Function

Having now reviewed the basic architecture of the function stack, we can now consider whether the dominant is better off partnering with the auxiliary versus the inferior function. Or, in light of the fact that the ultimate goal of individuation is to develop and integrate ALL the functions in the function stack, we might instead ask ourselves which of these two functions should be the chief priority or first step in the journey toward type development.

In my book, The 16 Personality Types, I suggest that the four functions are, generally speaking, developed sequentially from the top of the function stack downward. There is, however, one notorious exception to this rule—the inferior function.

Because the inferior stands as the dichotomous opposite of the dominant, it carries an undeniable and often irresistible appeal. This stems in part from the sense that mastering the inferior function would represent a psychospiritual achievement of the highest order, as the inferior is in many respects the last and greatest hurdle in the individuation process. This is why so many of us partake in what Elaine Schallock has dubbed “jumping the (functional) stack,” in which we forgo the sequential development of the auxiliary and, subsequently, the tertiary function in favor of directly tackling the inferior function.

The problem with jumping the stack, as Elaine and I have discussed elsewhere, is the dominant and inferior are separated by a vast psychological chasm in terms of both consciousness and maturity. Namely, the dominant is the MOST conscious and developed of the four functions, or what we might think of as the “mature adult,” while the inferior is the LEAST conscious and mature—“the child.” Thus, allowing the childish inferior function to take the psychological reins is a questionable enterprise at best, one which can ignite a host of problems associated with what Naomi Quenk calls being “in the grip” of the inferior function.

I like to think of the auxiliary as a bridge function, one that connects the dominant function with the lower half of the function stack (e.g., the tertiary and inferior functions). While it may lack some of the romantic allure and sparkle of the inferior function, it represents a more sustainable path to the expansion and integration of one’s type. In most cases, attempting to integrate the dominant and inferior functions without the aid of the auxiliary creates an “either-or” or “tug-of-war” situation rather than a symbiotic one. Again, this is because the psychological gulf is too great without having first bridged the two by way of the auxiliary (and tertiary) function.

The Role of the Functions in Typing & Type Differences

Second, the presentation of individuals disposed to jumping the stack vis-à-vis those who routinely employ their auxiliary function can be striking. Individuals of the same personality type exhibiting stark differences of presentation are sometimes described in terms of “subtypes.” I have personally known a few INTJs, for instance, who exhibited relatively little development of their auxiliary function, Extraverted Thinking (Te). Spending the lion’s share of their time engrossed in perception by way of their dominant Ni or inferior Se function, their outer presentation can almost resemble that of P types, i.e., displaying far less outward rationality (i.e., Te) than we would typically expect from an INTJ. Such INTJs can even seem hedonistic in their fascination with video games, television, comic strips, etc., as well as in their over-indulgence in food, drink, or other sensory pleasures. Those with a more developed auxiliary Te, by contrast, tend to take life a little more seriously, are more conscientious, and are more heavily invested in their work. Again, the underlying type is the same in both cases, but when different functions are being emphasized the outward presentation can be glaringly different.

Of course, selecting the auxiliary versus the inferior function is not always a free or conscious choice, but may be influenced by a host of factors—unconscious, environmental, and otherwise. Nevertheless, the overarching goal of type development remains the same: to develop and integrate all four functions in a healthy and sustainable fashion. And as long as the inferior function is routinely granted undue power and attention, the benefits of the auxiliary as a bridge function are likely to remain unrealized and the personality more polarized.

Learn more about the type theory and type development in our books:

The Auxiliary Function: A Key to Growth, Identity & Life Purpose