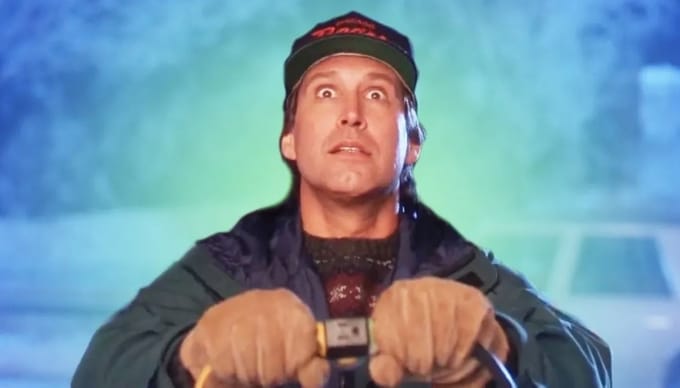 The holidays are upon us, and with them, the giddy buzz of electricity of that once-a-year occasion when life sparkles with magic and merriment! Ah yes, ‘tis the season for joy, love, generosity, goodwill, being with friends and family, and… oh yeah… for inferior function “grip experiences.”

We all know it too well: The Great Holiday Meltdown (“TGHM”)—also known as that ironic moment when all the wonderful things we idealize about the holidays turn sinister, suddenly sending us over the edge.

Much has been made of TGHM in our most beloved holiday movies, especially in comedies. Who can forget what is arguably the most famous TGHM in history: an unhinged Clark Griswold leveling an eggnog-induced rant against his boss in front of the entire family after being enrolled in the Jelly of the Month Club in the holiday film classic, “Christmas Vacation.”

While perhaps not to the same level as Clark Griswold, most of us have experienced our own version of TGHM at one point or another. And even if we haven’t experienced TGHM, we’ve definitely had unfortunate run-ins with our inferior function. TGHM is basically an exaggerated version of an inferior function grip experience that occurs around the holidays. Despite its downsides, it can be used as an opportunity to better understand ourselves and our personality type.

Grip experiences don’t happen in a bubble. More often than not, they are triggered by outside circumstances that seem to require compromising some part of ourselves. They can also stem from encounters with people who rub us the wrong way, quickly inciting our ego defenses. Even we may strive to stay poised, every new demand has a way of “upping the ante,” thereby increasing the likelihood of a grip experience. Never is this more obvious than around the holidays, when external demands—shopping, family, crowds, expenses, social obligations, etc.—are dialed to new levels. At the risk of sounding Grinchy, there’s a lot not to like.

That being said, we also know that what sends us into TGHM tailspin can vary according to our personality type. Namely, we can often trace the origins of a grip experience to differing inferior function triggers.

For INFJ and INTJ types (“INJs”), it could be the burden of shopping or decorating that ends up overwhelming their inferior Extraverted Sensing (Se) function. For ENTJs and ESTJs (“ETJs”) it might be the intensity of certain introverted feelings (Fi), such as grief or loneliness, associated with the holidays. For INTPs and ISTPs (“ITPs”), it may be the overwhelming social obligations (Fe) of the holidays detracting from their alone time. For ESTPs and ESFPs (“ESPs”), the failure to realize certain Ni ideals, hopes, and dreams (e.g., Clark Griswold) may prove detrimental.

Ironically, it’s often the case that the same activity that triggers a TGHM meltdown may be initially undertaken with great excitement and anticipation. As in the above examples, an INJ may initially look forward to shopping and decorating, an ETJ to experiencing personal feelings, an ITP to opportunities to be more social, an ESP to a chance to realize ideals. But this is typically short lived. Eventually we lose control over these symbolic manifestations of the inferior function, and they manage to control us, rather than the other way around. Thus, what initially looks promising turns sour, highlighting our lack of skill, stamina, or resilience with respect to the inferior function.

However, it sometimes takes a TGHM moment, with all of its ugly intensity, to reveal or remind us of our psychological blindspots. The tricky nature of the these grip experiences is they are rooted in the subconscious and tend to sneak up on us, as if out of nowhere. If we respond wisely, we can use these experiences as teachable moments, identifying and analyzing our triggers so we can do better next time around. If we respond foolishly, we’ll probably deny that we had a grip experience at all, allowing our ignorance of the subconscious to persist, putting us on the trajectory for déjà vu the next time around.

Fortunately, if we slip up, the New Year is just around the corner, offering us an opportunity to examine and better manage the source of our TGHM. Like peanut butter and jelly, Christmas, with its propensity for pushing us into grip states, and the New Year, mercifully offering us a way to atone, seem to be made for each other.