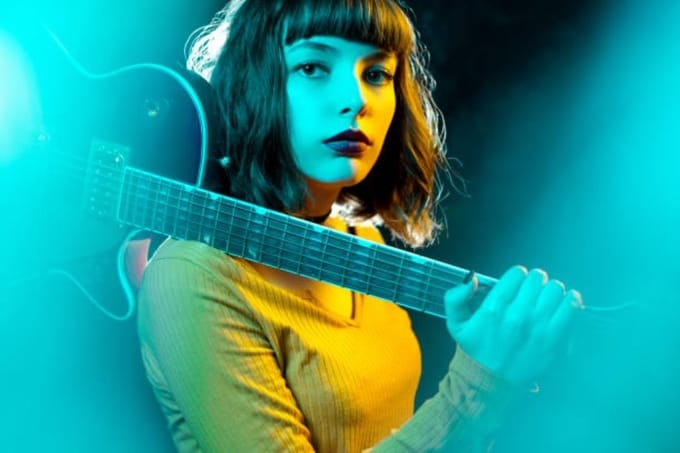 Don’t get me wrong, analyzing human personality through the lens of the eight cognitive functions is incredibly useful and interesting. But in some respects it’s only the tip of the iceberg.

As touched on in my book, My True Type, the philosophical versatility of the functions also makes them fascinating. I’m tempted to liken them to fractals, manifesting at myriad levels of reality—both micro and macro. Viewed this way, even tiny organisms like amoebas can be seen as exhibiting rudimentary forms of Thinking (T), Feeling (F), Sensing (S), and Intuition (N). Similarly, the functions could be applied in political theory to analyze the behaviors of individuals (I) and collectives (E)—fiscally (T), socially (F) and otherwise. I suspect that most biological and certainly most human phenomena can be classified and analyzed along these lines.

On such phenomenon—music—is a ubiquitous and cherished part of human life (especially in modern societies). So here I thought it could be fun and interesting to examine music through the lens of the eight functions. Doing so should also help you better understand the functions and their roles in different facets of life.

By the way, since I’ve had little in the way formal musical training, my use of musical terminology probably hovers around a fifth-grade level. So apologies to any readers who might appreciate a more complex analysis of music theory and the like.

While music is largely a sensory (S) phenomenon—ultimately comprised of soundwaves—what most of us really cherish is how it makes us feel (F). Music has a special way of bypassing our cognitive faculties and hitting us right where in counts—in our hearts and souls—irrespective of our personality type. While personality differences can certainly influence our musical preferences, all types can be similarly moved and affected by music.

We often turn to music to lift us up emotionally—to make us feel happier or less glum. But we also reach for songs that reflect and resonate with our current emotional state—whether sad, angry, playful, melancholic, etc. When talking about a song, artist, or genre that “speaks to us,” there’s a sense of feeling understood on a personal or emotional level.

Feeling plays a prominent role in musical composition and performance. It goes without saying that no shortage of love (or breakup) songs have been inspired by matters of the heart. But Feeling also operates at a more granular level. Namely, the combination of Feeling and Sensing seems to inform many musical choices. When musicians speak of “feeling their way” through the music, they’re often referencing this SF combination which, especially for professionals, is essentially instinctive. Due to their strong cognitive overlay, T types (particularly NTs) may have a harder time “losing themselves” in musical performance, that is, finding their way out of their heads and into their hearts and bodies. Hence, most genres will see lower numbers of NT musicians than other types.

The notion of “artistry” is commonly utilized in music circles. It’s typically used as a measure of creativity, originality, taste and overall quality. In most cases, it’s rooted in some combination of F and N, which play more or less equal roles in artistry. Indeed, the NF preference pair is well viewed as the quintessential “artistic” temperament, almost irrespectively of the particular art form.

Both Introverted (Fi) and Extraverted Feelers (Fe) seem to enjoy music in similar measures (no pun intended). Fi is a more individualized type of Feeling and hence, at least in some circles, tends to be associated with higher levels of artistry. As an extraverted function, Fe is more oriented to collective feelings and values. We’d thus expect Fe dominants (especially ESFJs) to gravitate toward more popular or conventional musical paths.

When Fi is auxiliary and Ne is dominant (i.e., ENFPs), one typically encounters a blend of popular and unique sounds. INFPs seem most willing to break with the mold and go their own way, even at the expense of popularity. That said, there’s no shortage of INFPs who have achieved musical stardom, in many cases because of their originality. This type seems particularly drawn to, and adept at, song writing.

There are myriad ESFP and ISFP musical maestros as well. SFPs tend to stand out when it comes to performance—be it vocally, instrumentally, stylistically or otherwise. Just as STP athletes can make the most difficult physical feats look effortless, so too with SFP vocalists and musicians.

On the whole, there seem to be far fewer FJ than FP celebrities in mainstream music. Considering that P represents the expression (i.e., extraversion) of perceptions rather than judgments, seeing higher numbers of P types in the arts and entertainment isn’t all that surprising.

For many folks, the Thinking (T) elements of music may seem less interesting. Unfortunately, experiencing the “fun parts” of being a musician—fluidly composing, playing, and improvising—typically requires some T preparation on the front end.

One of the first things budding musicians must learn is proper technique—how to optimally utilize their voice or instrument. While naturally gifted musicians may be able to get by with less than optimal technique, most mortals will have better success (and be less injury prone) if we start from a solid technical foundation. Technique is largely an ST thing—a matter of physical (S) geometry (T). However, because many instruments require more in the way of fine (versus gross) motor skills, F types may actually have an easier time achieving the necessary dexterity and rhythmicity.

Music also has an NT aspect called “music theory.” Music theorists look “under the hood” of music, dissecting and naming its different elements, including its myriad patterns, sequences, and progressions. While the ear naturally knows the difference between a major and minor chord, for instance, music theory tells us which specific notes / note “triads” comprise those chords. Music theory has also provided a language that allows musicians to reason and communicate abstractly about their craft, be it verbally or through reading music. This is particularly important in orchestras, where large numbers of musicians must remain synchronized in a very precise manner. In such settings, I’d expect to see a higher percentage of T and J types, with FPs gravitating toward less precise and more free flowing types of music.

Extraverted Thinking (Te) might be seen as representing the conventional wisdom of musical theory and performance technique. The ways in which one’s musical conceptions and techniques are unique or unconventional would thus be subsumed under Introverted Thinking (Ti). Musicians who never received formal training are apt to display a wider range of Ti idiosyncrasies. But even formally trained musicians may to some extent deviate from standard methods. While this may at times stem from laziness, there are surely cases where doing what “feels natural” works better, however unconventional it appears to others.

The Sensing functions handle incoming data from the five senses (Se) as well internal sensations and recollected experiences (Si). Music is first and foremost an auditory phenomenon, which seems to put it in Se territory. But we can also “hear” internally, as well as recall various tunes and melodies, thus making Si another key factor.

I suspect that skilled musicians (again, I’m not one of them) make use of Extraverted (Se) and Introverted Sensing (Si) in similar measure. In order to stay on pitch and calibrate volume, timing, synchronization, etc., Se is needed to gather external feedback—from one’s own performance, from fellow musicians, the audience, sound techs, etc. Meanwhile, Si is called on to remember lyrics, chord sequences, and the like. “Muscle memory” also plays a critical role, which might be seen as a rudimentary task of Si.

Se and Si also combine forces when composing music. Past experiences with life, language, and music—all are consulted for guidance and inspiration. Melodies or rhythms may also form in the mind or be felt in the body prior to vocalization or instrumentation. That said, many musicians compose with instrument in hand, setting the stage for a dance of inner (Si) and outer (Se) sensory experiences.

Contrasted with Intuition, Sensing largely attunes to details and particulars vis-à-vis their interrelations (N). Viewed this way, we might associate Sensing with isolated notes, drum beats, and so on. Sensing musicians might spend more time focusing on sensory details like pitch, sound quality, enunciation, and so on.

On a broad level, Se is often linked with physical or kinesthetic performance. So in addition to vocals and instrumentation, Se types (especially ESPs) may look for ways of introducing more showmanship or sensationalism into their performance—be it pyrotechnics, dance, lights shows, etc. More than other types, they appreciate an intense and diverse array of sensory experiences.

In conversing and listening to interviews with musicians, I’ve noticed that many tend to conflate Sensing, Feeling and Intuition. These functions can seem experientially similar (at least in their right-brained forms) and readily distinguishable from Thinking cognition.

But Myers-Briggs Intuition (N) has a more cognitive flavor than the garden variety. Extending beyond mere “gut feelings,” it entails a concern for abstract ideas, patterns, and symbols. Given that words themselves are symbols, it’s no surprise that N types seem particularly drawn to writing lyrics, as they are to poetry and prose.

Intuitives often show a marked interest in abstract reflection and dialogue, wrestling with “why” questions to understand deeper processes and underlying intentions. Hence, N musicians may be more apt to emphasize the meaning or message behind their music. NF types, in particular, may approach their music in a missional sense, perhaps seeing it as a vessel for healing or enlightening others; if it feels therapeutic to them, why not expect the same for others?

Introverted Intuition (Ni) is a penetrating form of Intuition, noted for discerning deep truths and foundational patterns. Especially when at odds with its surrounding culture (e.g., ES culture), Ni can come off as quite critical, turning conventional beliefs or customs on their head. Singer – songwriter Tori Amos is a good example. That said, NJ musicians are harder to come by than NPs, at least in part because of their relative rarity in the general population.

Extraverted Intuition (Ne) hovers a bit closer to commonplace views of Intuition than Ni. Especially when partnered with Fi, Ne’s conceptual aspects can seem less obvious. Nevertheless, Ne can be fiercely experimental and creative. It tinkers with and recombines past and current sounds until it stumbles onto something interesting, thus drawing the world of music into new sonic territories. At times, Ne experimentalism may be off-putting to older or more conservative listeners (“That’s not even music in my opinion!”). But for Ne, novelty itself is a core value. Like it or not, music (not to mention other art forms) would evolve at a far slower clip without the experimental and at times disruptive expressions of Ne (i.e., “NP”) types.

For an in-depth look at Ne and the NP types—their personality, life purpose, careers, relationships and more—be sure to check out our online course, Finding Your Path as an INFP, INTP, ENFP or ENTP.

How the 8 Functions Fit with the Enneagram

The Highs & Lows of Being a Creative Personality Type