A seven-time author with degrees in philosophy and neuroscience, Sam Harris is one of the most important thinkers of our day. A self-professed “information junkie,” Harris exhibits a near encyclopedic breadth of knowledge, particularly in the realms of science, philosophy, and global politics. Known for his crystal-clear thought and communication, Harris is a master of framing, analyzing, and summarizing complex issues.

Those familiar with Harris’s work will almost certainly recognize him as an INT type. In this post, we will consider whether he is best viewed as an INTJ vs INTP. My hope is that even those unfamiliar with Harris will find this discussion edifying and useful for differentiating these two personality types.

Despite their shared preference for introversion (I), intuition (N), and thinking (T), the INTJ and INTP actually have no functions in common. INTJs use Ni, Te, Fi, and Se, while INTPs employ Ti, Ne, Si, and Fe. This functional disparity contributes to important cognitive and motivational differences between these types.

Having read a couple of Harris’s books and listened to many of his podcasts, I can say that I, as an INTP, have consistently appreciated the clarity and concision of his logic, not to mention many of his conclusions and prescriptions. I even resonate with Harris’s views on core philosophical matters, such as determinism and consequentialism. Having rarely enjoyed this degree of intellectual comraderie with INTJs, I initially suspected Harris to be a fellow INTP. There were, however, some typological red flags.

In exploring his book, The End of Faith, several years ago, I remember feeling uneasy with his hardline views on religion. While Harris is sympathetic toward, and to some extent even promotes, mysticism / spiritualilty, he is on the whole a scathing critic of religion. I was uncomfortable with his sweeping condemnation of religion, which he views as a sort ideational cancer. While agreeing with Harris regarding religion’s role in myriad historical atrocities, not to mention modern Jihadism, Harris seems to downplay its potential benefits or sees them as readily replaceable.

Harris’s swift dismissal of religion may be objectionable to INTPs due largely to their concerns about meaning. As discussed in my books, The INTP and The INTP Quest, INTPs are more apt to self-identity as “meaning-seekers” than INTJs. As the INTP psychiatrist and Holocaust survivor, Viktor Frankl, once attested: “Man’s search for meaning is the primary motivation of his life.”1 Such idealization of meaning is presumably due to the inferior nature of INTPs’ feeling function (Fe). Namely, because of Fe’s relative unconsciousness, INTPs may fail to experience meaning as readily as other types, which may engender real concerns about their falling prey to utter meaninglessness or nihilism. To compensate, they may enstate meaning as an ultimate goal or ideal, which is precisely what we encounter in thinkers like Frankl. With this in mind, we can better understand why INTPs may be reluctant to eliminate potential sources of meaning, including religious ones, from their existential arsenal.

INTPs may also suspect, as Jung did, that much of humanity would find it difficult to replace the bedrock of hope and meaning that religion provides. Because of their own psychological concerns about meaning, INTPs are inclined to be sympathetic toward those drawn to religion for meaning-related purposes. Thus, they often possess a higher tolerance than INTJs for those holding “irrational” beliefs for the sake of personal meaning or comfort.2 An INTP might even argue that religion is defensible insofar as it can make life more meaningful or worth living. Philosophically, this is the sort of argument one might expect to see from the existentialists (e.g., Kierkegaard) or pragmatists (e.g., William James), most of whom tend to be NP types.

Less plagued by subjective concerns about meaninglessness, INTJs are disinclined to sympathize with arguments from personal meaning. Rather than fretting over meaning (F), INTJs tend to be more preoccupied with the challenges posed by inferior sensing (Se). While these challenges may assume a variety of forms, INTJs are particularly apt to struggle with the profound sense of incongruence between their image of an ideal world (Ni) and the world as it currently exists (Se). Similar to INFJs, they are deeply convinced of the veracity of their ideals and perceptions. Ni, in tandem with Te, engenders a deep sense of knowingness, which is why INTJs are perplexed and frustrated when they encounter what they perceive as ignorant, foolish, and irrational beliefs and behaviors. Thus, many INTJs see their essential purpose as one of correcting false beliefs / perceptions, hoping that this will effectively narrow the gap between their ideals and reality. Put differently, INTJs aspire to make the world a more “rational” place, one free of the myriad ills arising from irrational thinking.

It is precisely this sort of project that we find in Sam Harris, who I am now convinced is an INTJ. The basic contours of Harris’s work are actually quite similar to those of another influential INTJ—Al Gore. Both Harris and Gore are well conceived as societal prophets. Convinced they hold the answers to what is wrong (or will go wrong) with the world, they see it as their role to enlighten humanity in order to stave off future catastrophe. Because of their strong sense of conviction, as well as the direct and unapologetic manner in which they express their perceptions and prescriptions, one can sense a certain direness in the INTJ’s message. For instance, in the closing lines of The End of Faith, Harris writes: “The days of our religious identities are numbered. Whether the days of civilization itself are numbered would seem to depend, rather too much, on how soon we realize this.” I must say that it is hard for me to imagine an INTP taking such a grave view of religion, especially of religion as a whole.

INTJs also tend to be purists and idealists with respect to truth, which they see as sacrosanct and worthy of utter seriousness. In Harris’s words, “Nothing is more sacred than the facts.”3 And “where we have no reasons, we have lost our connection to both the world and one another.”4 While INTPs are also truth seekers, their attitude toward truth is more fickle and, at times, even irreverent. One reason for this is INTPs don’t experience the same degree of conviction about what is and isn’t true. Their combined use of Ti and Ne is the perfect recipe for doubt, skepticism, ambivalence, and/or relativism, which can easily render them less respectful of, and more cavalier toward, truth as the highest ideal. In fact, INTPs often show equal or greater reverence for other ideals such as meaning, purpose, freedom, or creativity. So while truth certainly plays an important role in the INTP psyche, its status is more fragile and tenuous than it is for INTJs.

Over the course of their lives, INTJs can be seen as diligent in their construction and refinement of a single, complex framework of truth. Although INTPs also enjoy seeking and creating truth structures, they are sensitive to, and at times threatened by, excessive structure, which can leave them feeling stifled and caged in. And in the event that they feel bored or unduly restrained by a given structure, their inclination is to jettison or destroy it (even if it happens to be one they created), effectively furnishing themselves a clean slate for new explorations and creations (Ne). So while INTJs are characteristically constructive in their approach to truth, INTPs operate as both seekers and destroyers (or if you prefer, deconstructors) of structured truth. This is not to say, of course, that INTJs aren’t highly critical of what they see as false or unsubstantiated truth claims, but only that they are more consistent and loyal toward their own previously established truth structures (Ni-Te).5

I have great respect for Sam Harris. He is a brilliant and well-developed INTJ, unmatched in his conceptual and communicative clarity. Although he doesn’t share my level of sympathy for those who embrace religion, I appreciate his metaphysical openness and endorsement of spiritual practice (e.g., meditation). I also applaud his unwavering commitment to reason and evidence, which, among other things, has allowed him to transcend traditional political lines. In my experience, Harris’s intellectual honesty and logical clarity have a way of neutralizing our typological differences, thereby laying the groundwork for true objective consensus; and this, in my view, is no small feat.

Learn More about INTPs & INTJs in Our books: 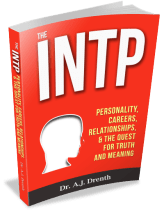 2. Insofar as INTPs acknowledge the value of personally meaningful beliefs, they may resonate with certain aspects of the Enneagram type Nine. In fact, it may largely be Jung’s sympathies in this respect that led the Enneagram authors Riso and Hudson to type him as a Nine. As Jung once opined, “A psychoneurosis must be understood, ultimately, as a suffering of a soul that has not discovered its meaning.” In case you were wondering, Sam Harris is likely an Enneagram Five, but with notable One (i.e., Reformer) tendencies, both of which are very common among INTJs.

5. Nor is this to say that INTJs never act in a destructive manner. However, any destructive impulses are typically expressed through Se channels (e.g., excessive eating, drinking, spending, etc.), thus leaving their NT truth structures intact.