The eight cognitive functions (e.g., Ne, Ni) can be seen as representing neurotypical operations of the human mind. They’re the tools we reach for to help us understand and effectively navigate life. They thus fall under the purview of what’s historically been called “normal” psychology.

Truth be told, I’ve personally been more interested in, and have spent more time investigating, neurotypical psychology (especially as it relates to personality) than neurodiverse (a.k.a., “abnormal”) conditions. But one of the benefits of studying psychological disorders is they can shed light on certain aspects of neurotypical psychology. In some cases, they may even resemble what amounts to a more pronounced or salient version of a neurotypical phenomenon.

In this post, we’ll take a closer look at ADHD. Not only is ADHD interesting and worth studying in its own right, but it can also furnish key insights into the nature and workings of Extraverted Intuition (Ne)—a function used predominantly by ENTP and ENFP types and secondarily by INTPs and INFPs. We will also explore connections to Big Five Openness, dopamine, creativity, and bipolar disorder, as well as paths to success and happiness for Ne types.

Attention deficit hyperactivity disorder (ADHD), formerly known as ADD, is characterized by inattention, hyperactivity, and impulsivity. Depending on which classification criteria are applied, it’s believed to affect 2-7% of children. Males are twice as likely to receive the diagnosis as females.

ADHD is believed to stem from deficiencies in executive control functioning, impacting one’s ability to focus, monitor performance, stay on task, and successfully complete goals. Executive functioning is comprised of three main aspects: inhibition, switching, and updating. The primary impairment in ADHD appears to involve the inhibition component. In order to stay focused on a task or goal, we need to be able to inhibit distracting thoughts or irrelevant stimuli. Without this ability, it’s easy to lose sight of our goal, like “drifting off” when reading a book.

In their cleverly titled paper, Uninhibited Imaginations: Creativity in Adults with ADHD, researchers Holly White and Priti Shah describe how individuals with ADHD find it particularly difficult to inhibit or filter out new information. This compromises their ability to sustain attention, earning them descriptors such as “easily distracted” or “can’t focus.”

While it’s easy to jump to the conclusion that persons with ADHD are simply incapable of focusing, this isn’t necessarily the case. Both anecdotal and empirical evidence suggest that boredom and inattention are closely related and that boredom may be an important underlying factor in ADHD. I’ve personally known a number of folks with ADHD who’ve observed that their attention is greatly enhanced when engaging with a topic or activity that interests them.

The neuromodulator dopamine is believed to play a central role in ADHD. Leading ADHD drugs, such as Ritalin and Adderall, have dopamine-enhancing effects. Experientially, this translates to a heightened sense of pleasure, focus, and motivation.

The Big Five personality domain, Openness to Experience (or simply, “Openness”), has also been linked to dopamine. Big Five researcher Colin DeYoung associates Openness with “exploration” and refers to dopamine as the “neuromodulator of exploration.” Moreover, dopamine appears to be a key factor in Extraversion. Taken together, current research suggests that dopamine, exploration, Openness, and Extraversion are interconnected in important ways.

As discussed in my post on Big Five Openness and the Myers-Briggs, Openness correlates substantially with Myers-Briggs Intuition (N) and to a significant but lesser extent with Extraversion (E) and Perceiving (P). And since Extraverted Intuition (Ne) is the dominant function of ENP types, there’s good reason to believe that Openness will overlap substantially with Ne, both empirically and conceptually. 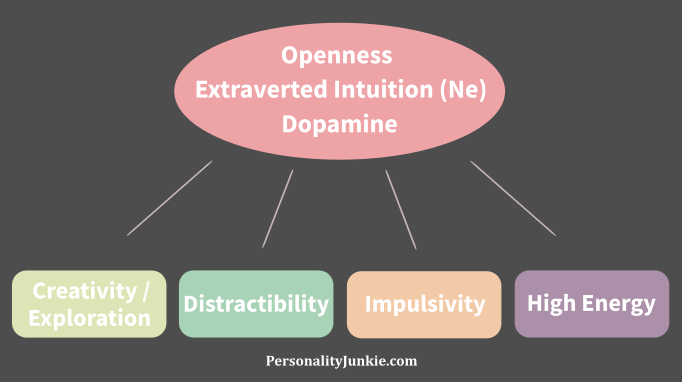 Not surprisingly, Ne is considered an open, explorative, and creative function. Ne dominant types—ENTP and ENFP—tend to have broad and divergent interests. They can struggle to finish one task or project before a more appealing prospect catches their eye. Drawn to novelty and new possibilities, their minds naturally gravitate to “the next thing.” In his classic work, Psychological Types, Carl Jung describes Ne types as perpetually looking to break free of the perceived confines of their present situation. This squares well with conceptions of ADHD where sustained focus is undercut by the allure of greener pastures. What others types consider “distractions” Ne types may see as “opportunities.”

This shed lights on the potential relationship between boredom and exploration in persons with Ne or ADHD. Namely, I suspect that exploration is used, at least in part, as a balm against boredom. Put differently, novelty-seeking serves as a defense against dissatisfaction with the here and now. This may be particularly true for males with Ne. In their paper, “Age and Gender Differences in Boredom Susceptibility,” Vodanovich and Kass contend that males generally have “a higher need for varied external stimulation” than females.

Both clinicians and researchers have noted substantial overlaps between ADHD and bipolar disorder / cyclothymia. These may include heightened energy, activity, distractibility, impulsivity, and rapid speech.

As we saw with ADHD, dopamine is thought to play a central role in bipolar disorder. Manic episodes are ostensibly fueled by mega doses of dopamine, while depressive phases correspond to its relative absence.

Many of the things we’ve discussed thus far—ADHD, Openness, Ne, dopamine, and mania—are also related to creativity, in particular, to divergent thinking. Divergent thinking—as exemplified, for instance, in the “brainstorming” ideas or solutions—is aided by higher amounts of dopamine. By contrast, convergent thinking, where focus is maintained until a solution is found, apparently benefits from less dopamine.

In the “Uninhibited Imaginations” article I mentioned earlier, the researchers found that subjects with ADHD outperformed the control group on measures of divergent thinking, but performed worse on convergent thinking measures. This squares with characterizations of Ne types as divergent thinkers—witty, clever, and creative “idea people”—who may struggle to manufacture the focus and persistence required for convergent thinking. They may be well suited for art, entertainment, marketing, or innovation, but may discover that formal scientific work, however interesting, fails to fit their personality and thinking style.

Given adequate levels of dopamine, Ne thrives on creative (as well as social) activity and its attendant psychological rewards. However, too much dopamine can lead to a state where, among other things, convergent and cogent thinking is impaired. When dopamine levels wane, Ne types may struggle with low mood, which is made worse when contrasted with the pleasure of dopamine highs.

Considering the substantial overlaps between dopamine and Ne, success and happiness for NP types, from a neurochemical perspective, will largely hinge on their ability to effectively regulate dopamine. In addition to the aforementioned prescription drugs, stimulants like caffeine are known to facilitate dopamine release. But consuming excessive amounts of caffeine or other stimulants will ultimately have negative consequences. While these drugs can temporarily ramp up dopamine, they can also disrupt sleep and beget lower lows.

Learning to find enjoyment when external stimulation or dopamine activity is low is therefore important for Ne types. This can be facilitated through practices like yoga and meditation, which come with the added benefit of improving executive functioning. Such practices can also help NPs better regulate their moods and state of being, undergirding their creativity with a more calm, centered, and stable foundation.

Like other types, NPs typically seek careers and activities that furnish the right amount of challenge, interest, and stimulation, laying the groundwork for flow experiences. At times, finding flow can feel like a high-wire balancing act for NPs as they teeter between over and under-stimulation. But given enough practice and persistence, NPs can learn to walk the line with greater ease, achieving more of their goals and even finding some contentment along the way.

To learn more about living well and realizing your potential as an NP type, be sure to check out our online course, Finding Your Path as an INFP, INTP, ENFP or ENTP. It’s a doorway to transforming your inspiration into purposeful action and results.

Extraverted Intuition (Ne): An Inside Look

The “Flow” Experience: The Art & Benefits of “Losing Yourself”