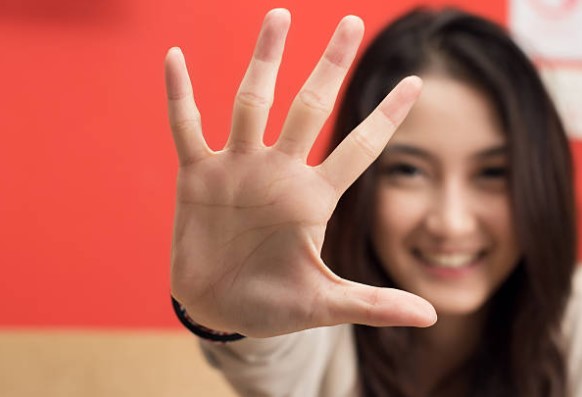 What you’re about to read may seem so strange and uncanny as to warrant derision as pseudoscience. But hang in there. Because it’s not. Study after study has shown it to be a scientific reality, one that offers fascinating insights into human biology and psychology.

The uncanny phenomenon is this: the ratio of your second (i.e., index finger) to fourth (i.e., ring finger) finger is a reliable indicator of your prenatal testosterone exposure during gestational weeks 12-16.

So what? Why should we care about prenatal testosterone?

The short answer is that our degree of testosterone exposure, as approximated by our digit ratio, corresponds to how masculine versus feminine our brain and cognition is. In particular, as we will soon discuss, Myers-Briggs enthusiasts may be excited to learn that your digit ratio likely corresponds to your Thinking (T) – Feeling (F) preference, with more masculine ratios suggesting a Thinking preference and more feminine ratios a Feeling preference. Before discussing digit ratio and its relationship to personality type, however, let’s first examine some of the key scientific findings and effects of prenatal testosterone.

Another interesting finding is that children tend to have digit ratios similar to their mother’s. This suggests that a mother’s degree of masculinity / femininity will be reflected in her offspring (so be sure to call your mom today and thank her for her contributions to your brain and psychology).

For those who aren’t mathematically inclined, digit ratio can be a bit confusing because:

Technically speaking, they are inversely related. Men generally have lower digit ratios and higher prenatal testosterone than women. To minimize any confusion regarding this inverse relationship, I will typically describe the ratios as more masculine (i.e., “masculine ratio”) or feminine rather than using the lower vs. higher terminology.

Prenatal testosterone exposure and digit ratio are also related to sexual orientation. In particular, lesbians tend to have a more masculine digit ratio than heterosexual women. The findings are somewhat less clear in gay men. However, according to the leading expert in this field, John Manning, white homosexual men generally have more feminine finger ratios.

Wikipedia has an extensive list of traits associated with digit ratio. Here are some of the more noteworthy correlations:

How to Measure Your Fingers

Straighten your fingers and look at the palm of your hand. We are concerned with the second (index finger) and fourth (ring finger) fingers. At the base of your index and ring fingers (where they meet the palm) there are creases. Choose a midway point on the crease and mark it with a pen if you wish. Measure from there to the tip of the finger, using a caliper, ruler or tape measure, being as precise as possible. See the image below. 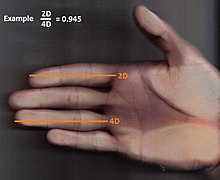 To calculate your digit ratio, simply divide the length of your index finger (“2D”) by that of your ring finger (“4D”) as follows:

Or, to express the same thing using different terminology:

We will now interpret your digit ratio using normative data from two empirical studies: one from the University of Alberta and the other from Warwick University. For the sake of simplicity, I averaged the mean digit ratios and standard deviations from these studies. Please note the while the data from these studies appears to be reliable, other studies have reported ratios up to 0.01 higher (thus, a mean digit ratio of 0.96 rather than 0.95 in males).

Since the data is organized by sex, it’s important to keep in mind that the mean digit ratio for males (0.95) is significantly more masculine than the mean ratio for females (0.97). Moreover, for what it’s worth, Manning typically uses 0.92 to represent a characteristically low (i.e., highly masculine) ratio. As illustrated below, this ratio is one standard deviation below the mean for males.

Here’s the digit ratio distribution for the male participants: 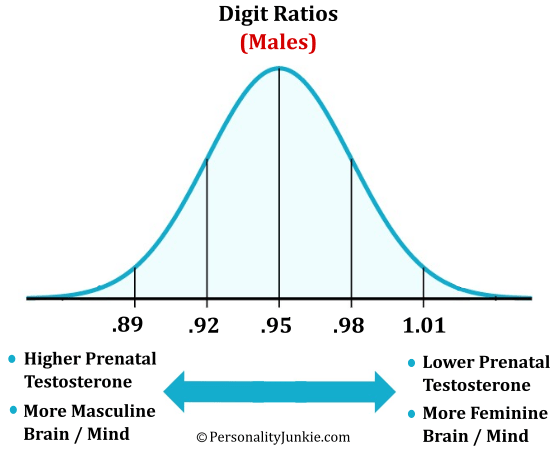 And here’s the digit ratio distribution for female participants: 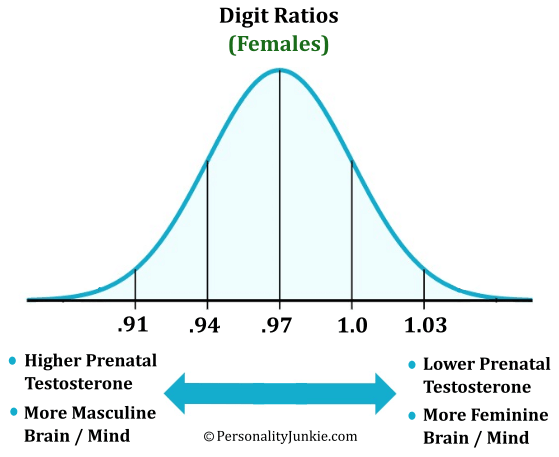 While there’ve been a couple studies comparing digit length with the Big Five taxonomy, to my knowledge, none have done so with the Myers-Briggs. So just for fun, I decided to make some ballpark predictions regarding the probable digit ratios of Myers-Briggs Thinkers (T) versus Feelers (F).

Both research and ordinary experience suggests a significantly higher percentage of Thinking (i.e., more masculine brain) males and Feeling (i.e., more feminine brain) females. Assuming that roughly two-thirds of men are Thinkers and females Feelers, we can use the above diagrams to make the following estimates:

Again, these predictions are provisional and certainly won’t hold true for everyone. Nonetheless, there’s good reason to believe that digit ratio will correlate with T-F preference, even if only moderately.

Learn More in Our eBooks:

Face Thyself: How Your Body Reveals Your Personality Type