Neither Jung nor Myers-Briggs included Neuroticism in their personality taxonomies. But the deeper I dug into the Neuroticism research, its relevance to personality psychology in general, and the 16 personality types in particular, became increasingly evident.

In this post, we’ll explore the ways in which Neuroticism overlaps with the Myers-Briggs preferences and may complement, as well as complicate, the type discovery process.

What is Neuroticism? How is it Assessed?

Neuroticism is one of the Big Five taxonomy’s primary domains. It assesses the presence and prevalence of negative thoughts, moods, and emotions—things like worry, anxiety, depression, guilt, anger, impatience, and self-consciousness. It also indexes the volatility of one’s emotional complexion. If your emotional life is like a rollercoaster, marked by frequent highs and lows, twists and turns, you’ll likely score higher in Neuroticism.

Expressed formulaically, Neuroticism might be understood as “unit of emotional upset per unit of stress.” In other words, Neurotic individuals get more upset and unsettled by life stressors that others tend to brush off or handle in stride.

Measuring Neuroticism is not always easy, however. Personality assessments depend on, and are susceptible to errors in, test takers’ self-awareness. Test takers must both perceive and be willing admit to having Neurotic traits. Any breakdown in self-perception or self-honesty can dramatically alter one’s results. Unusually stressful life circumstances may also undermine test accuracy.

When I was younger, I scored relatively low on Neuroticism. But now, some twenty years later, my scores are higher. So why the disparity? I see no reason to believe I’ve become significantly more Neurotic (I’d like to think I’ve become somewhat less so). One thing I know has changed, however, is my level of self-awareness—the degree to which I’m aware of my negative or shifting inner states. I’ve also learned to give negative emotions their say rather than reflexively exiling them from my Thinking-dominated consciousness.

If Introverts tend to more self-aware (in contrast to Extraverts, who are more attuned to externalities), as well as less optimistic and enthusiastic, we’d expect them to score higher on Neuroticism.

And this is indeed the case. Big Five research consistently shows substantial empirical overlaps between Introversion and Neuroticism. This leads to our first observation regarding the effects of Neuroticism on type discovery:

If you’re higher in Neuroticism, you’re more apt to test as an Introvert (I).

One of my biggest “aha moments” about Neuroticism was learning of its relationship to mind wandering, or what’s sometimes called “self-generated thought.” Indeed, some researchers see mind wandering as the “engine of Neuroticism.”

In their paper, “Thinking Too Much,” Adam Perkins and colleagues describe Neuroticism as “the tendency to self-generate negatively hued thoughts and feelings.” They also consider Neurotic thought to be characteristically abstract insofar as it focuses on events and experiences “beyond the current situation.” Interestingly, Myers-Briggs Intuition (N) is also described as operating abstractly vis-à-vis Sensing (S). This suggests a potential point of overlap between Neuroticism and Intuition, namely, a propensity for reflection, or more specifically, self-reflection.

Further substantiating this overlap is research demonstrating higher levels of Neuroticism among creative types (most of whom are Intuitives), especially those in the arts and humanities. And while this relationship is empirically weaker than that of Introversion and Neuroticism, it’s nonetheless worth highlighting:

If you’re higher in Neuroticism, you may be more apt to test as an Intuitive (N).

The notion that Intuitive Introverts—INFJ, INFP, INTJ and INTP types—tend to be more Neurotic squares with common perceptions of these types, as well as the highly sensitive person (HSP) construct, which shares a number of overlaps with Neuroticism. Indeed, it’s hard to imagine Intuitive Introverts who are high in Neuroticism not identifying with the following HSP descriptors:

In light of the above, we might envision self-reflection as the conceptual hub which connects Introversion, Intuition and Neuroticism: 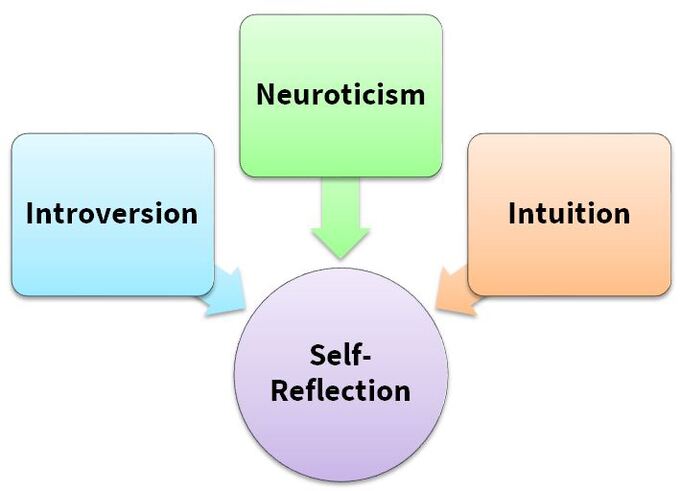 That said, there are plenty of Intuitives who are reflective, but not terribly self-reflective. And in many (most?) cases, such individuals are lower in Neuroticism. They’re often found in STEM careers, or in more Extraverted fields like education or marketing. Intuitive Introverts Bill Gates and Mark Zuckerberg are good examples, as both are inclined to focus on outer affairs—business, technology, etc.—more than their own personality or self-development.

Research also demonstrates that Feelers score significantly higher on Neuroticism than Thinkers. This may partially stem from the fact the Neuroticism is generally conceived in terms of affect and emotions rather than cognition. And because Feelers are more in touch with their emotions generally, they’re more likely to experience negative or volatile emotions associated with Neuroticism (see my post, How Thinkers and Feelers Deal with Emotions, for more on this). Hence:

If you’re higher in Neuroticism, you may be more apt to test as a Feeler (F).

By contrast, Thinkers are inclined to unwittingly repress or ignore negative emotions, such as by throwing themselves into their work. So even those with higher Neuroticism may score lower due to poor emotional self-awareness. They may thus be surprised when others perceive them to be more moody, angry, hostile, or volatile than they see themselves.

If asked to link Neuroticism with either Judgers or Perceivers, I suspect many people would couple it with the latter. Just as Neurotics exhibit emotional volatility, Perceivers are often seen as less stable, reliable, and dependable than their Judging counterparts.

Moreover, in Big Five literature, one frequently encounters contrasts between Neuroticism and Conscientiousness (which moderately correlates with MBTI Judging) with regard to psychological and physical wellness. Namely, higher Conscientiousness is usually linked with better outcomes in health and work, with the opposite being true of Neuroticism. Therefore, we might expect that:

If you’re higher in Neuroticism, you may be more apt to test as a Perceiver (P).

That said, in our post, Introversion, Anxiety, Judging & Conscientiousness, we discuss research demonstrating that individuals experiencing anxiety and negative feelings often engage in Conscientious behaviors. In other words, when feeling worried or afraid, they may conscientiously make plans or take steps toward ameliorating these concerns. So even though Judgers may seem outwardly composed and confident, their inner situation may be quite different.

One might also argue that Perceivers’ spontaneity or unreliability needn’t result from emotional instability, but could instead stem from divergent creativity or attention deficits. The relationship between Neuroticism and the J-P preference is therefore more complicated and less reliable than it is for some of the other preferences.

As we’ve seen, individuals scoring high in Neuroticism are much more likely to test as Introverts (I). They may also lean more toward Intuition (N), Feeling (F) and Perceiving (P). So in order to maximize testing accuracy and self-understanding, we are wise to incorporate an understanding of Neuroticism into our personality calculus.

While high Neuroticism is typically viewed as inauspicious, it does have potential upsides. In particular, it may enhance self-awareness, self-reflection, and creativity. While Neuroticism can certainly make life more stressful and difficult, it can also be harnessed and applied toward creative ends.

Of course, doing so requires a fair amount of skill and grace. On the one hand, attending to our wandering minds can serve as a portal to creative ideas and insights. But as we meander more toward worry, cynicism, or self-loathing, creative inspiration can quickly erode. Additional strategies may thus be needed to facilitate creative, rather than self-defeating, results.

To learn more about effectively harnessing your creativity in accordance with your personality type, be sure to explore our online course: Finding Your Path as an INFP, INTP, ENFP or ENTP.

If you’re still unsure of your type, we’ve developed a number of tools to help you clarify your type: