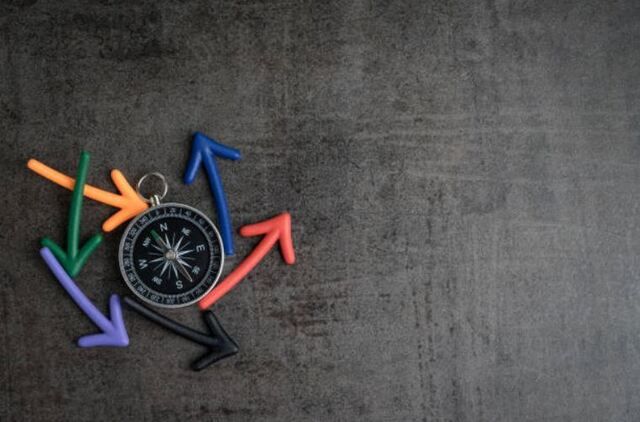 Many of us are asked this question, even if only half seriously, as young children. What’s interesting about this question is it implies a singular answer. We can’t, after all, become both a doctor and a professional football player (at least not very easily). Modern careers are presumed to be fairly circumscribed and one-tracked. And the onus is on us to find our truest path, passion, or calling.

Modern careers are fashioned around specialization—the ability to learn and perform a defined set of tasks really well. I’m reminded of the AT&T commercial which cleverly points out that “just okay, is not okay.” It shuffles through scenes of people appearing horrified that they had selected surgeons, tattoo artists, etc. that were “just okay.” I think we can all relate to the fact that, whenever possible, we too want goods and services that are better than okay. In this sense, we tacitly endorse and promote specialization.

But here’s the rub. Even though we appreciate the goods and services birthed by specialization, there’s a significant swath of career seekers that, for reasons we’ll soon get into, resist specialization. Perhaps you’re one of them. There’s a host of monikers for such persons—dabblers, dilettantes, jacks-of-trades, tinkerers, generalists, Renaissance people, and so on.

That said, it can be hard, as career seekers, to know if we’re actually a dabbler—someone who’s hardwired for a varied and multifaceted work life—or if we’ve simply yet to find our true calling. Relatedly, at what point should we stop searching for our “one thing” and instead adopt a more diversified career identity?

In addition to simply not knowing what the future holds for us, there are numerous reasons we might resist self-identifying as dilettantes. Chief among these is that it’s much harder to gain social status and respect as a dabbler than as an expert or specialist.

Dabbling is often associated with a lack of self-discipline, commitment, or follow-through. According to Merriam-Webster, it “suggests desultory habits of work and lack of persistence.” We all know that it’s socially acceptable, even admirable, to have a variety of hobbies. But when it comes to our career, culture pushes us to consolidate our energy and resources into a single channel. Unless a person happens to be unusually gifted in multiple domains, consolidation increases our chances of specialized know-how and “success.”

Granted, some of these trends may be shifting with expansion of remote work and the “gig economy,” allowing greater work flexibility and less time tied to an office chair. But even gig workers are expected to be highly skilled and to specialize in a way that distinguishes them from their competitors. Changes in work hours or locations may thus have a smaller impact on the demand for specialization than we might suspect.

When it comes to choosing a career or college major, dabblers tend to do one of two things. The first, as you might have expected, involves being mired in doubt and indecision, stemming from “too many choices” or concerns about choosing the wrong path.

Less obvious is that some dabblers may actually commit to something prematurely, ostensibly as a means of quieting their anxiety. Only later, when their doubting and dabbling propensities come to the fore, do they come to question or regret their initial decision, perplexed as to how they acted so rashly and shortsightedly.

From a personality perspective, however, rash decision-making (i.e., impulsivity) and indecisiveness aren’t as unrelated as one might think. Impulsivity can be associated with Extraversion (E), Perceiving (P), and Big Five Neuroticism, while indecision relates to Neuroticism, Perceiving and, to some extent, Introversion (I).

Another relevant factor is Myers-Briggs Intuition (N), or what the Big Five calls Openness. Intuition (especially in combination with Extraversion and Perceiving) contributes to a greater breadth of interests, as the notion of “Openness” implies.

Taken together, we’d expect the “ENP” personality types to be the most characteristically dilettantish.

ENJs and IN types commonly exhibit fairly broad interests as well. And since IN types can also be quite open and indecisive, they too may fit the bill as career dabblers.

A Closer Look at the Dabbler Mindset

Non-dabblers might assume that dabblers are chronically dissatisfied or simply lack the discipline or fortitude required for expertise. And insofar as contentment, self-discipline, and fortitude are virtues worth pursuing and developing, they may have a point. But we should also try to understand the inner experience of dabblers, recognizing that they too have a rightful and necessary place in the world.

Dabblers have a relatively low tolerance for familiar or repetitive tasks. To experience flow, they need a steady stream of new challenges and opportunities for learning and self-development. Once they’ve developed a skill, they don’t want to simply apply it ad infinitum, but to layer additional skills on top of it which open up new possibilities for creative thought and action.

Dabblers can be incredibly devoted to (even obsessed with) projects that interest them or problems they’ve yet to solve. But this devotion has a shelf life and will eventually taper off, which can leave them feeling down or aimless.

Not even dabblers know in advance how long their inspiration will last. In some cases, something that seems really interesting at first proves disappointing upon closer investigation, like a mirage in the desert. The seemingly fickle nature of inspiration can be incredibly frustrating for dabblers who use it to fuel their work and explorations.

Dabbling also influences how we engage with ideas. It has a way of limiting how deeply we’re willing to go into a given topic. In my post, How ENTP, ENFP, INTP, & INFP Types Use Extraverted Intuition (Ne), I describe how dabblers, after getting the “gist” of something, can quickly grow bored or impatient with sifting through additional details. Even if their initial enthusiasm is high, their desire to go deeper can wane once they get a general sense of what it’s about.

In my post—Creator or Expert?—I discuss Dean Keith Simonton’s notion of “early creators.” According to Simonton, early creators run with new ideas much earlier than experts, even prior to extensive knowledge gathering. Their desire to build, share or create trumps whatever concerns they have for acquiring domain expertise. In Simonton’s words, they “wish to venture into the unknown, to ask new questions rather than learn old answers.”

This is not to say that dabblers never revisit ideas or activities. On closer inspection, many dabblers can be seen cycling through a palette of interests so that, after enough time away from something, returning to it feels fresh and invigorating. Doing so also allows them to see the activity through an updated lens of knowledge and experience which opens up new possibilities that weren’t evident or available the first time around. Such cycles of interests are central to the ways and desires of dabbler types. 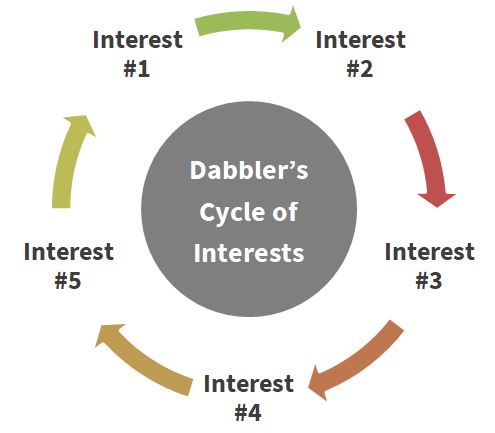 In addition to their disinclination toward specialization, dabblers’ cycling interests can lead them to feel that they aren’t really making progress in their careers.

The truth is that dabblers are moving forward, but they’re doing so in a spiraling (rather than linear) fashion. Consequently, their path to competence may seem longer or more difficult to discern. Instead of getting really good at one thing, they gradually gain competence in a number of different roles.

It’s also worth noting that certain roles or activities—usually creative ones—are more apt to engender rewarding flow states, making dabblers more likely to consistently invest in them. So given enough time and motivation, dabblers can actually enjoy significant creative success despite their broader interests. In fact, research suggests that creativity is actually boosted through the cross-pollination that can occur across multiple interest areas. Hence, aspiring creatives should be wary of unduly narrowing their creative focus.

Simonton argues that what he calls “creative cross-training” can also buffer against creative declines over time. Composers who alternate between symphonic and chamber music, for instance, have showed greater creative staying power than those who focus exclusively on one or the other. The same goes for scientists. Those exhibiting lifelong productivity are typically engaged with multiple lines of research.

Should Dabblers Work as Freelancers or Employees?

It’s rare for dabblers to find their unique suite of skills and interests perfectly reflected in a single career or job description. This can be frustrating for those seeking their “ideal” job and feeling their arsenal of skills should be valued and rewarded by employers. Invariably, this raises the question of whether dabblers might not be better off working for themselves, fashioning their own personalized career rather than trying to force-fit themselves into an organization. Of course, there’s no correct or consistent answer to this question, as it will vary greatly according to the individual.

Generally speaking, dabblers looking to work as employees are apt to have better luck in a small business. Here’s the basic rule of thumb: the smaller the business, the more roles each employee has to play. This is obviously a plus for dabbler types. It also happens to be the same reason they might choose to start their own business. This doesn’t mean it’s impossible to play multiple roles in a larger organization. But larger businesses as a rule are structured around specialization.

Certain career niches will also be a better fit for dabbler employees than others. Marketing is a great example of a niche that typically calls for a variety of skills and interests—be they artistic, social, administrative, technical, or otherwise. Granted, some individuals (often Introverts) may recoil at the very idea of marketing, making it a non-option for them. And that’s perfectly fine. Personal values are obviously an important piece of the career calculus that can’t be ignored.

Job-seeking dabblers may at times be too quick to dismiss job opportunities that might actually work out if given the chance. Research suggests that personal foresight (e.g., how happy we’d be in situation X) can be unreliable and we’re actually more adaptable than we think can be.

In general, Extraverted dabblers seem more open to trying jobs they’re not 100% sure about, whereas Introverts are great at finding reasons to say no. This may be due in part to Extraverts being more adaptable, optimistic, and collaborative by nature. Hang-ups about working for others may drive some Introverts to self-employment, which can often be a good thing. In either case, there will be challenges and trade-offs, which is what makes it such a difficult dilemma.

As discussed in my post, The Day Job Reconsidered, there’s also a third career option—working for someone else while simultaneously maintaining or aiming for some version of self-employment. Although this may seem less than ideal for those convinced that they hate their day job, if approached in the right way, it can be a surprisingly rewarding (perhaps even optimal) solution for many dabblers.

To learn more about the personality, struggles, and career paths of dabbler types, be sure to check out our online course, Finding Your Path as an INFP, INTP, ENFP or ENTP, which is now on sale.

Creator or Expert? Personality & Ability in Creativity and Expertise